Love is colorblind in Mandy Sayers’ Love in the Years of Lunacy, but with World War II raging, Pearl may have to go to war to keep it. 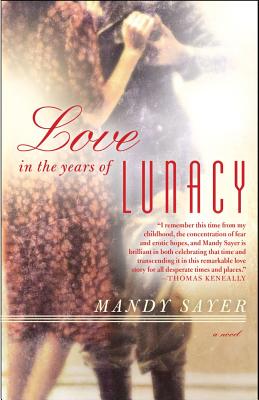 When thinking about World War II, most Americans think about the experience of white American GIs, not other countries’ forces or the involvement of soldiers of color. So, too, does the situation in Europe tend to overshadow the events and battles of the Pacific theater.

Writing from the perspective of a young Australian woman who falls in love with a black American soldier, Mandy Sayer brings a fresh view to the oft-explored territory of World War II.

About Love in the Years of Lunacy

In 1942, Pearl is a beautiful 18-year-old woman. She and her twin brother, Martin, are musicians — sax players — and both of them frequently play at the Trocadero, Pearl usually with her best friend as part of an all-girl group.

After a concert one night, Pearl gets some constructive criticism on her playing from a handsome African-American soldier. She learns that the soldier, James, is an incredibly gifted saxophonist in his own right and, before long, love blossoms between the two musicians.

The racial difference between Pearl and James is an issue, however. Not for the two lovers, certainly, but for society and the U.S. Army. James isn’t even allowed to carry a gun in the army, let alone be obviously romantic with Pearl in public.

Certain that there’s no way the two of them can be together, James considers breaking off their relationship, but cannot bring himself to do it. Instead, he petitions his C.O. for permission to marry Pearl. Unfortunately, his C.O. is a good old boy from the South who cannot abide the thought of James in a relationship with a white woman. Not only is James denied permission to marry, but he is also shipped out to New Guinea.

After a period of deep depression bordering on madness, Pearl decides she cannot simply sit back and accept a life without James by her side. Resourceful woman that she is, she cooks up a plan to find him, even if it does mean getting herself to New Guinea in the middle fighting. But can love really win out over not just a racist culture, but a war as well?