Despite what critics think, Lady Gaga made Lindsay Lohan’s day on Monday by telling her what a big fan she is of Liz & Dick. And Gaga asked Linds to consider: What would Liz do? 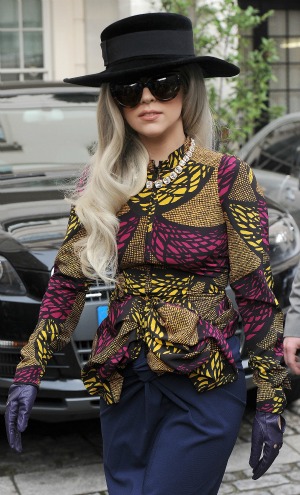 Of the fewer than 4 million people who watched Liz & Dick‘s original airing Sunday night, very few would call themselves fans of the Lifetime movie. But one of its biggest fans may just turn that around with her influence. Lady Gaga herself tweeted to Lindsay Lohan after the film aired that she loved it.

“@lindsaylohan you did a beautiful job on Liz & Dick,” Gaga wrote Monday. “Let no one bring u down, Liz didnt, they always try to knock the greats down a few pegs.”

Lady Gaga’s influence extends to almost 32 million followers on Twitter, and the comment received more than 3,000 retweets and almost 2,000 likes in just one day. But Gaga wasn’t sending some random person a tweet — the two celebrities actually know each other.

“It may seem a bit random that Gaga is sending Lohan some viral love, but the accolade doesn’t come out of nowhere,” said MTV. “The twosome once partied together at the Chateau Marmont and there had even been rumors that Lohan could make an appearance in a future Gaga music video.”

Lohan didn’t receive many good reviews of her performance, and she made it clear that Gaga’s comment really meant a lot to her.

“@ladygaga thank you so much!” she responded. “You are such an incredible force and that means the world to me 🙂 love & hugs xo hope to see you soon bella.”

Despite the response of critics and the public to Liz & Dick, Lohan felt from the very beginning that she was the right person to play Elizabeth Taylor.

“Everything I’ve gone through made me ready to play Liz,” she told Us Weekly.

When the magazine asked what advice she thought Taylor would give her about her own life, Lohan seemed to feel she had learned the actress’s personality well enough to answer.

“She probably would have said, ‘Figure it the hell out,'” she said. “You have to learn it for yourself sometimes.”