Ashlee Simpson finds herself back on the dating market after she and Boardwalk Empire actor, Vincent Piazza, break up. But might they get back together? 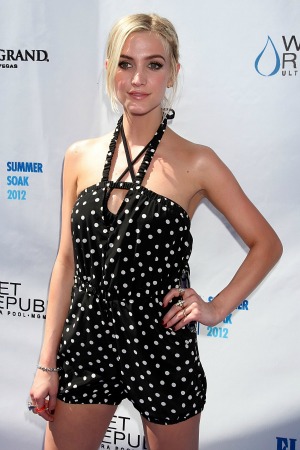 Is there something in the water over at the Simpson household? Not only are Joe and Tina Simpson getting a divorce, but daughter Ashlee finds herself back on the dating market.

The 28-year-old singer and Boardwalk Empire actor Vincent Piazza have reportedly ended their relationship after dating for a year and a half. The couple paired up in June of 2011, just after she separated from her husband, Pete Wentz of the band Fall Out Boy.

It seems that sources are talking to both the New York Post and Us Weekly about the difficulties of maintaining a long-distance relationship with such busy schedules.

One source told Us Weekly, “There was no bad blood and no third party involved. It was honestly just a long distance relationship and it became too hard to make it work. It’s not necessarily forever and they could get back together. Nobody is to blame. Just the distance.”

Another source told the New York Post, “It was a mutual agreement to split, but things have been bumpy for a little while, so perhaps they might reconcile.”

While all of these sources are busy talking to the media, we have yet to hear any official word from the couple themselves. Simpson has kept a fairly low profile since the reboot to Melrose Place was cancelled. She has been busy raising son Bronx, 4, from her marriage to Wentz, and she has a role in the 2013 film Pawn Shop Chronicles.

Piazza, on the other hand, has been shooting his TV show, plus he has two films in the works, Surviving Me and 3 Nights in the Desert.

With all of these hot young Hollywood actors back on the market, perhaps we could suggest a hookup between Simpson and Shia LaBeouf?