Matthew Perry’s Ryan King is finally ready to get back in the dating game. He’ll have help from an Olympic Gold Medalist when Misty May-Treanor invites him to play a little volleyball. 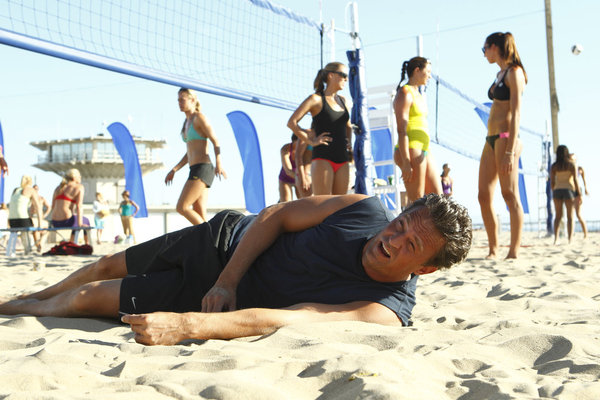 Matthew Perry‘s widowed character on Go On, Ryan King, has been going to group therapy for a while now in order to deal with his loss. In this week’s episode, Ryan decides to jump back into the dating game. With a rockin’ new Facebook picture, a new favorite band and a Porsche, what more could he need to score with the ladies?

Apparently, a little help from gold medal-winning volleyball player Misty May-Treanor is also in order. Ryan King is a well-known sportscaster and we’re guessing that’s how he knows Misty. So, when his job lands him an invitation to play some beach volleyball with Misty and some of her athletic gal pals, King jumps at the chance to be surrounded by beautiful, athletic women. But will he score, or will he make himself look like a fool?

It’s Matthew Perry — what do you think?

Tune in to Go On to follow Ryan King on his hilarious journey of self-discovery in group therapy with some fellow widows and widowers.

More of Go On

Matthew Perry is back on NBC’s new series Go On
NBC’s Go On gets ratings of Olympic proportions
NBC’s Go On: This is how the group deals with grief?