Former Melrose Place star Amy Locane-Bovenizer probably wishes this was part of a nighttime soap script, but she’s headed to jail after a vehicular manslaughter conviction. 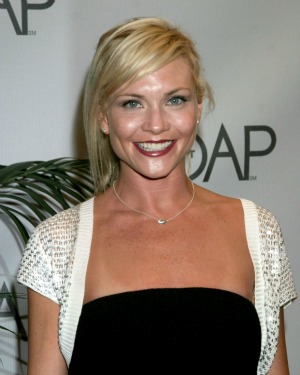 If only this were a nighttime soap storyline, but unfortunately this story is true. Former Melrose Place star Amy Locane-Bovenizer was convicted on Tuesday of vehicular manslaughter in New Jersey.

The case goes back to June 2010 when Locane-Bovenizer was driving under the influence and hit a couple in a car as they were turning in to their driveway. A 60-year-old woman, Helene Seeman, was killed and her husband Fred, who was driving the car hit by the actress, was seriously injured. It was determined that the mother of two’s blood alcohol level was three times the legal limit.

To make matters even more complicated, Locane-Bovenizer’s defense team tried to shift some of the blame to a third driver, Maureen Ruckelshaus. She was rear-ended by the actress’ SUV before the fatal crash.

Ruckelshaus was trying to get her to stop, but the defense attorneys said that the rear-ended driver helped cause the second crash by pursing Locane-Bovenizer’s SUV.

The 40-year-old now faces five to ten years in prison for the vehicular manslaughter and an additional three to five years for the second count of assault by auto stemming from Mr. Seeman’s injuries. The sentencing date is March 1 and her bail was officially revoked. The School Ties actress will have to serve at least 85 percent of her sentence.

As Assistant Prosecutor Matthew Murphy told the Associated Press on Tuesday, “There were no winners declared by the verdict. There are only losers. A husband lost his dear wife; his two children lost their mother; and Helene’s mother lost her daughter. That loss can never be rectified by a verdict.”