Scarlett Johansson might have a new career on her hands after she filled in for ailing weatherman Al Roker on the TODAY Show on Tuesday. 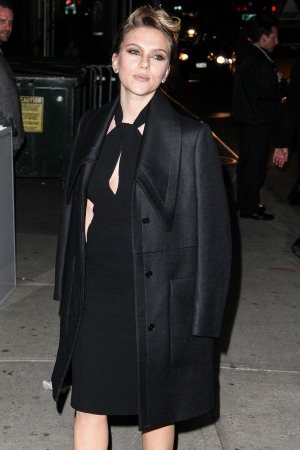 If you were expecting to see Al Roker give you the weather on Tuesday’s TODAY Show, you might have been a bit shocked to see Scarlett Johansson delivering the information instead.

The morning show weatherman was struck with a bout of laryngitis, so the Hitchcock actress, who happened to be promoting the movie on the NBC show that day, gamely stepped in for Roker.

She cheerfully offered to fill in for the ill newsman with, “I have a lot of experience with weather, yes. This is my dream come true.”

Later in the broadcast, The Avengers actress went outside with the other TODAY Show co-hosts to deliver the forecast in Rockefeller Plaza. She did it with a bit of flair, a few spirit fingers, and a kick at the end of her delivery which featured Roker’s signature tag line, “Here’s what is happening in your neck of the woods.”

It seems like news anchor Matt Lauer was pretty impressed as he told Johansson, “I even love when you did the gesture towards Pennsylvania.”

No word on whether she will be a permanent fixture on the TODAY Show if Roker doesn’t recover from laryngitis, but she’s certainly having quite the busy month. The 28-year-old actress is promoting Hitchcock, in which she plays legendary Psycho star Janet Leigh, she’s been spotted around New York with her new boyfriend, Romain Dauriac, and the Tony winner will be back on Broadway in mid-December with the revival of Tennessee Williams’ Cat on a Hot Tin Roof.

Hitchcock opened in theaters on Nov. 23.