A revealing New York Times interview uncovers Winfrey’s secrets, including a run-in with cancer and the downturn of O Magazine. 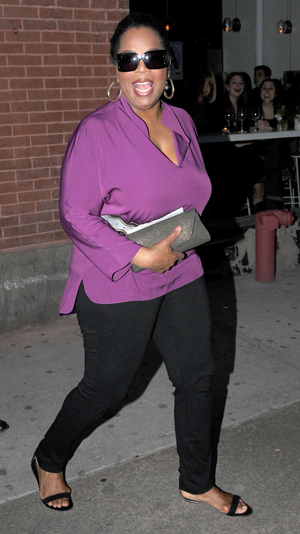 Oprah’s BFF Gayle King was stunned when Winfrey revealed she had a breast cancer scare, The New York Times reports in an intimate look at the talk show star.

Winfrey was attending a conference when she announced suddenly that a doctor’s exam had turned up evidence of breast cancer, but it turned out to be nothing.

King was in the audience and was shocked by the news, which she hadn’t heard before.

“When Ms. King grew visibly upset, one woman chided Ms. Winfrey for not telling her friend ahead of time and ordered her to apologize to Ms. King — all before an audience,” write Times reporter Christine Haughney.

The Times profile also uncovered Oprah’s dissatisfaction with her signature O Magazine, which suffered falling circulation and declining ad sales this year, something the Huffington Post puts down to the end of Oprah’s daily afternoon talk show.

Oprah said she may cease publication if the magazine begins losing money.

“I’m not interested, you know, in bleeding money,” she says.

Over at the OWN network, things are on the upswing, a retort to the many negative headlines the faltering network has garnered in recent years.

During an interview with CBS News this summer, Oprah could recall certain headlines word-for-word, admitting that the negative press had “knocked me off center.”