Since Brad Pitt and Angelina Jolie played Mr. And Mrs. Smith, fans have been wondering when they’ll become Mr. and Mrs. Pitt. Pressure from their large brood seems to be winning out over Brad’s previous claim that he and Angie would wait until marriage was legal for all. Now he’s saying it will be “soon.” But how soon? 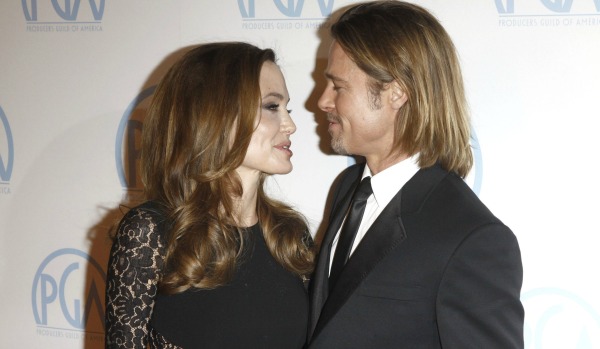 Smart celebrities know if they want to be left alone on their wedding day, it’s best to do it when something bigger is going on. So what could possibly be bigger than the most highly anticipated nuptials of our generation? Christmas. Think about it. All the paparazzi and reporters will be nestled, all snug in their beds, while Brad and Angie decide to wed. These two celebrities are famous for shunning the popularity that surrounds them, so we could see them huddling around the Christmas tree with their offspring, exchanging vows — in front of a Santa impersonator, perhaps?

Any Friday between now and New Year’s

For the same reason stated above, Brad and Angie may be planning a Friday-in-December wedding. Remember when headlines about Tom Cruise and Katie Holmes’ divorce circulated on a Friday? Afternoon, no less? That was brilliant. It still made headlines, but all us entertainment writers in the industry had already checked out for the weekend, and were kind of pissed when we had to go back to work and write about Tom Cruise’s third failed marriage. Getting married on a Friday is a close second to Christmas — it would get covered more than a Christmas wedding, but reporters wouldn’t be happy about it.

Pretty much any day in December

There are several interesting anniversaries in December that Brad and Angie may want to honor by joining in holy matrimony. Dec. 1 is World AIDS Day. Brangelina loves nothing more than stirring up a little awareness. Dec. 3 is International Day of People with Disabilities. With all the couple’s humanitarian efforts, perhaps they’ll get married on Dec. 10, which is Human Rights Day. Brad and Angelina have strong ties to Africa — Angie’s humanitarian work, their first pictures as a couple were in Africa and their daughter, Shiloh was born in Africa. Perhaps they will marry on Dec. 12, which marks Independence Day in Kenya. Our bet is that they will marry Friday, Dec. 14, which as everyone knows is haven’t-you-guys-been-together-for-seven-years-and-don’t-you-already-have-six-kids-and-you’re-probably-already-married-and-no-one-would-give-a-rip-if-you-weren’t-Angelina-Jolie-and-Brad-Pitt-day. (OK, so we may have made that last one up.)

Again, this holiday will serve as the perfect diversion with most people either in New York City or watching the gathering in Times Square on TV. People are so hung over on New Year’s, it could be a week before people even catch on to a Brad/Angelina marriage. Angie’s New Year’s kiss to Brad might also be her first kiss as his bride. Talk about a memorable way to ring in the New Year!