The Jeffersonian gang find themselves in a sticky situation when an artist winds up literally glued to a dead body. 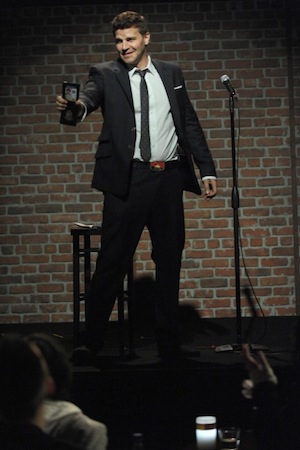 Bones has a way of making gruesome murders pretty humorous, but this one is probably the best example this season.

A rebellious street artist falls off a billboard sign and finds himself literally glued to the dead body of a stand-up comic. Very creative.

At the Jeffersonian, the gang is trying just about everything to separate the artist from the comedian, and it is finally peanut butter that saves the day. The sticky artist is revealed to be the locally famous painter, Zed, and upon learning this Angela (Michaela Conlin) freaks out.

Apparently, she’s been having an art crisis. She had wanted to pursue a career as an artist and that didn’t pan out. Something about Zed awakens old dreams, perhaps, or maybe she just finds his talent irresistibly sexy. Either way, she pounces on him and kisses him! Sucks to be Hodgins right now.

While Angela is dealing with the aftermath of kissing someone who is not her man, Bones (Emily Deschanel) and Booth (David Boreanaz) explore the case of the dead comic, Morgan. He doesn’t have a very good reputation. He was known to steal women and was accused of stealing jokes, so it’s not a big surprise that he was found with his teeth bashed in and ceramic from a toilet seat in his mouth. This crime was personal.

The case leads them to Morgan’s girlfriend Alexa and her brother Elliott. Awkwardly, the two laugh out loud when they hear the news of Morgan’s death. That’s not a great way to meet the FBI and prove your innocence. Alexa explains she thought Morgan was just playing a practical joke. Pretty dark sense of humor that one had.

Elliott, who wrote some jokes for Morgan, recorded Morgan’s routines and offers to let Sweets (John Francis Daley) watch them. Sweets is able to determine that Morgan’s jokes were written by other people, which means they could have been stolen, and that would give someone a great motive to kill him. Sweets is able to persuade Booth to do a stand-up routine made of stolen jokes to lure the killer. It doesn’t take long for local comic, Annie, to accuse him of stealing her jokes.

Annie pleads her case that she is not the murderer since she actually sold jokes to Morgan. The two had plans to go to New York, where she would become a successful joke writer and he would be a comedian. 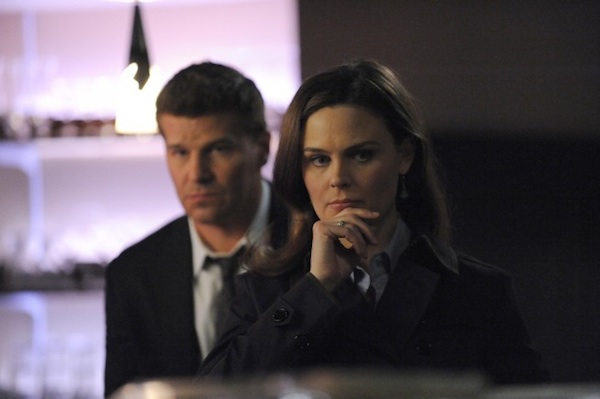 Back at the Jeffersonian, Brennan and her crew were able to match the ceramic remains with a toilet in the DC area (that is really impressive). That toilet happens to belong to Alexa and Elliot. Elliot quickly confesses to the murder. He was angry because Morgan wouldn’t help him with his act. That’s all it takes to beat someone with a toilet seat, I guess.

In the end, Hodgins and Angela have some issues to work out, but it seems like they smoothed things over pretty quickly. He’s insecure she’ll leave him and she’s insecure that she’s not a good artist. But, Zed did compliment her artwork, so that’s a win for her. Still seems like a loss for Hodgins, though.