Gossip Girl shows no shame as it plows toward the series finale. 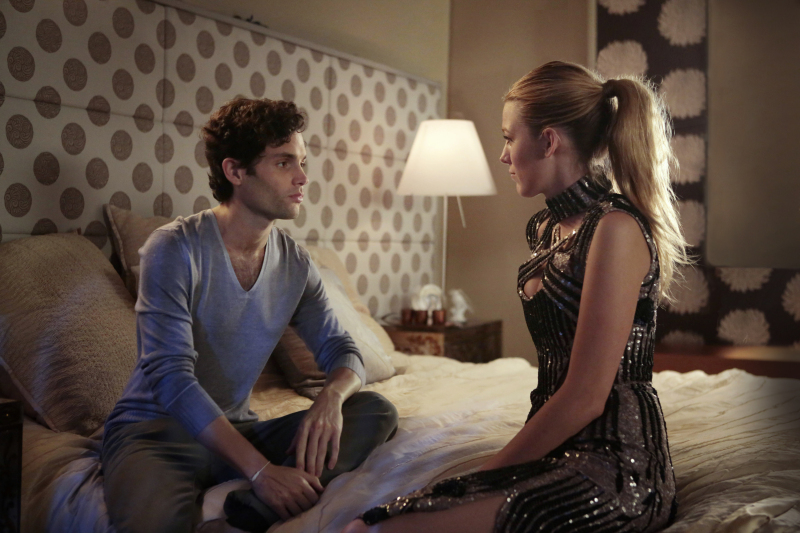 Let’s try something new this week shall we?

As I watched Monday’s Gossip Girl episode — “Save the Last Chance” — I kept a running diary of the key scenes, funny jokes, and questions that burn deeper than my disdain for Ivy Dickens.

8:02 MT— We’re quickly whisked into Serena’s (Blake Lively) bedroom where her and Dan (Penn Badgley) look like they’re recovering from a busy night. Van der Humphrey just wishes they could stay like “this” forever. The “this”, of course, means hanging out in secret rather than public exposure. It’s actually not that bad an idea for Dan and Serena, Halle Berry and Olivier Martinez, or anyone for that matter.

8:03 — Bart Bass is done ransacking his son Chuck’s apartment in search of the stolen microfilm (containing evidence to put Bart in prison) — or as Chuck cracks — his missing Viagra. The touching moment is ruined when Ivy Dickens (Kaylee DeFer) enters with a plan to use the microfilm as bait. I can’t even focus because I’m developing a gag relax for every scene involving the con artist turned harlot. Her character has become more loathsome than previous Gossip Girl villains Agnes Andrews and Juliet Sharp combined.

8:04 — Has anyone ever looked as good fist pumping in a suit on Central Park West as Nate Archibald (Chace Crawford)?

8:05 — Serena shows up at Blair’s (Leighton Meester) office declaring peace as she’s dressed in a skirt that flies so high it nearly crosses into restricted air space. Nelly Yuki (Yin Chang) drops by to poke fun at Blair’s new clothing series (the “B Line”) and steals the scene as she’s done throughout the entire season of Gossip Girl. Keep stealing, Nelly. Because you’re one of the few bright spots this season. Especially when 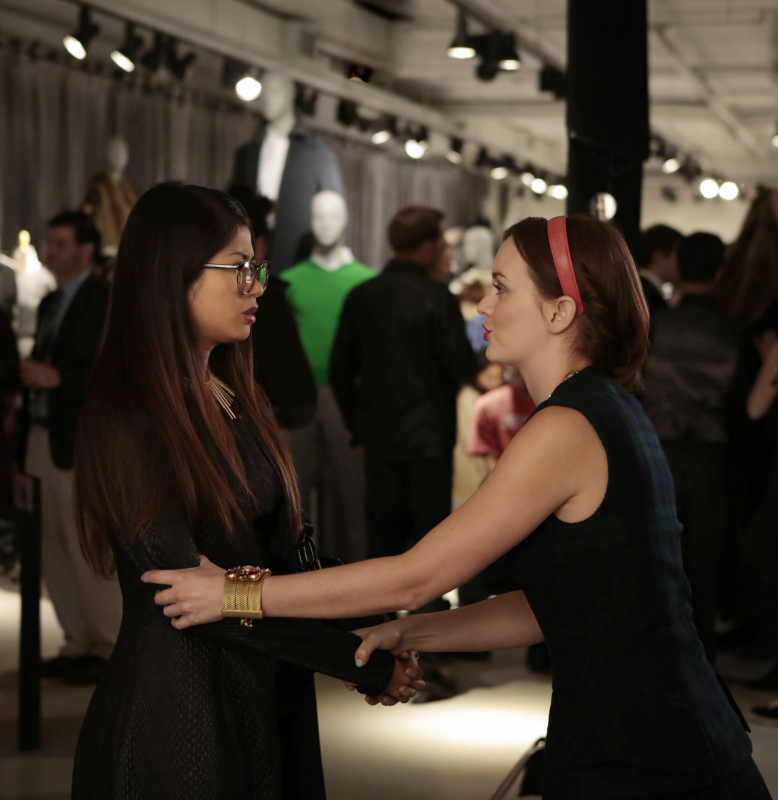 8:08 — The return of Serena’s father William (Billy Baldwin) is the first bombshell of the night. Let’s take a moment to get this whole thing straight. Ivy, who at one point pretended to be Serena’s cousin Charlie, has been hooking up with Rufus, but is now making out with the real Charlie’s father plus scheming to take down Lily van der Woodsen, who is the former wife of both guys Ivy’s sleeping with? Gag. And I thought the Kristen Stewart-Robert Pattinson relationship was hard to keep up with.

8:13 — Back from the commercials, and I nearly threw up in my lap after Ivy climbs in William’s lap.

8:15 — Dan apologizes to Nate and Chuck (Ed Westwick) as part of Humphrey’s soul-searching mission. Apparently, Dan’s also been searching for the deepest V-neck sweater in Manhattan to expose his growthy chest hair.

8:18 — You knew this one was coming. Rufus spots Ivy smooching a mystery man and then gives us a classic Rufus stare down. Meanwhile, I’m scrambling for a rag to clean up the chunks off my keyboard during the commercial break.

8:24 — Blair calls a meeting of the “Five Dons,” — a group of Manhattan’s most powerful coeds. Sage is present as Blair asks for the Dons’ support at the clothing line debut. The meeting begs two questions:

2)   Do they really know enough about the Godfather trilogy to refer to each other as Dons?

8:27 — Dan’s soul searching takes him back to Brooklyn for a heart-to-heart with Rufus. They’re interrupted by Ivy’s nauseating, “Honey I’m home!”  Gag. No vomit this time. Just Ivy packing her bags with a smile on her face.

8:29 — Sage walks down the street yacking away on the phone about how she’s going to spoil yet another of Blair’s schemes. I don’t care. I just want to know: Do high school girls really dress like that???

8:34 — Back from commercial break to see the Dons arrive at Blair’s fashion outing. Seriously, do high school girls really dress like that????? 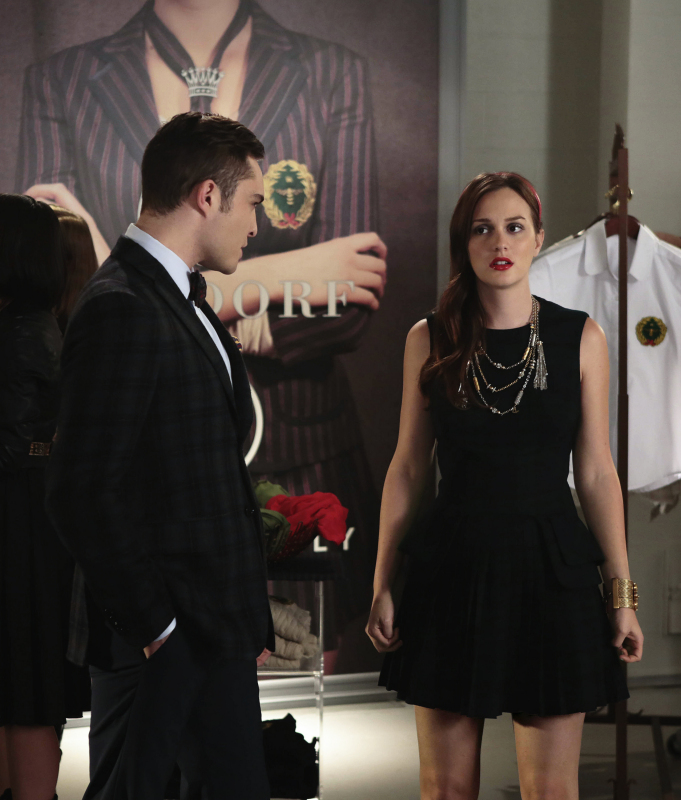 8:35 — Blair and Chuck are back on screen together for the first time in two episodes. It’s slightly awkward, which means we’re bound for another Blair and Chuck meltdown before the end of the night.

8:37 — “Take off your clothes! Strip!”  Yep. That’s the classy Ivy Dickens for you! Always getting older men to undress. Except this time it’s Bart Bass unbuttoning.

8:40 — Line of the night brought to you by Bart while half-nude in front of Ivy: “I’m fine being your Eliot Spitzer scandal.”

8:47 — Bart Bass brought his A-game tonight folks! After returning from a commercial break, we see Bart, Chuck, and Ivy squabbling. As Bass Jr. departs, Daddy Bass taunts his son asking, “Does Blair need you to come over to kill a spider?”

8:48 — Blair’s outing is a huge hit with teenyboppers fighting over hair accessories like it’s Black Friday. Serena tells us Blair’s about to get everything she’s always wanted. Except Blair pauses…Don’t say it Blair! … Don’t say all you want is Chuck! … Yep, she said it.

8:49 — Lily tosses the microfilm Ivy used as bait into the fire, as Chuck painfully looks on. Hopefully that’s the last we ever hear of microfilms on this show. And I mean, ever.

8:54 — Last segment of the show starts with drunk Nate who sounds a lot cooler talking s*** to Bart Bass than sober Nate.

8:55 — The moment we’ve been waiting for, err — expecting, err — knew was coming all along just happened. Chuck tells Blair they can’t be together because he’s failed at his insanely implausible, convoluted mission to defeat daddy. No, really. That’s his excuse. I hope this puts an end to Chuck and Blair. I hope Jenny Humphrey comes back for another crack with the Chuck.

8:57 — The juxtaposition from Chuck and Blair to Dan and Serena is striking. Dan professes she’s the “One.” Serena goes to get champagne to celebrate.

8:58 — Almost an entire Gossip Girl episode’s gone by without Georgina. Darn. Well, maybe Dan’s not the stand-up guy he’s leading us (and Serena) to believe. A mysterious phone call from Georgina provides an ominous ending to yet another underwhelming episode in Gossip Girl‘s final season.

Now please excuse me while I purge all thoughts about Ivy Dickens.

Who is Gossip Girl? The cast reveals their best bets
Gossip Girl comes back to life in Episode 6
Gossip Girl and the proposal mix-up