Who knew The Luncheonette would draw such lofty visitors? Guess which Irish boy is stopping by this week: Glen Hansard! 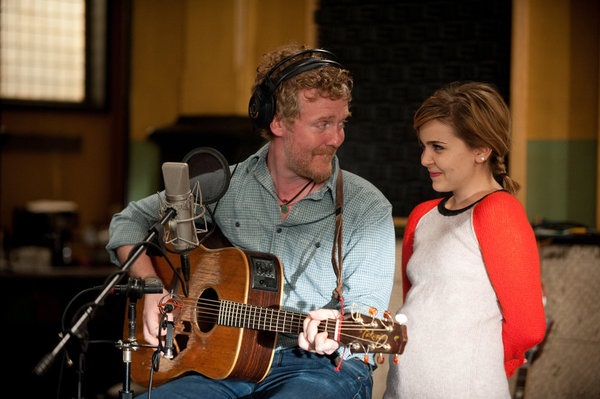 When Adam & Crosby (Dax Shepard) purchased the famed Luncheonette recording studio, Parenthood fans had no idea of the awesomeness in store. The hit show about the struggles and triumphs of a close and expanding family continues to rake in excellent musical guests to “record” at The Luncheonette.

This week is no different.

Joining the cast and spending time in the recording booth on the latest episode of Parenthood is none other than Irish folk-rock great Glen Hansard. If the name doesn’t ring a bell, you may remember one of his two bands, The Swell Season (with Marketa Irglova) or The Frames (a more rock-tinged band from the ’90s who are rumored to be returning to the stage).

The Swell Season acted and sang in 2007’s Once, a movie about a struggling Irish busker who happens upon an immigrant woman with a beautiful voice. Together, the two make even more stunning music than they do on their own, and soon they decide to record an album. The soundtrack to Once is made up entirely of songs by The Swell Season and earned Hansard and Irglova an Academy Award for Best Original Song for “Falling Slowly.”

Hansard also recently put out some solo work. His voice on his solo album, Rhythm & Repose, is striking and often heartwrenching, much like the love story that unfolds in the movie. And, if you’re a Hunger Games fan, you may also recall his name from that film’s soundtrack. It featured his song “Take the Heartland.” (Maroon 5‘s “Come Away to the Water” was also written by Hansard.)

An hour of Parenthood ought to mean at least one or two full songs from the handsome and insanely talented Glen Hansard. A still from this week’s episode shows Amber (Mae Whitman) standing beside Hansard and looking quite giddy. If the actress is half the music fan that Amber is, her expression required very little acting. Pull on a toasty sweater, brew up some warm tea and prepare to swoon.