It looks like there is a second-generation model in the family as the late Anna Nicole Smith’s daughter, Dannielynn Birkhead, steals the spotlight in the GUESS Kids spring 2013 campaign. 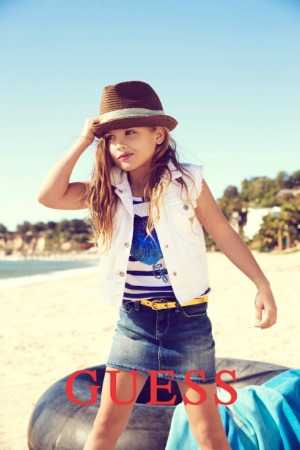 The torch has officially been passed. Dannielynn Birkhead, daughter of the late Anna Nicole Smith and father Larry Birkhead, is a second-generation GUESS model.

The 6-year-old is a part of a the GUESS Kids spring 2013 campaign, which was shot on the beaches of Malibu, California, by photographer Ellison Lutz and directed by Paul Marciano, creative director at GUESS, Inc.

In a statement on Monday, Marciano said, “Dannielynn has the same playful spirit that her mother had on a set. She is a second-generation GUESS girl, which makes this campaign a first for us.”

Smith was a GUESS model in 1993 shortly after she was chosen to be Playboy‘s Playmate of the Year. She became one of GUESS’ most iconic models during that era.

The larger-than-life star led a tumultous life after her heyday with lawsuits, an addiction to prescription pills, and the loss of her son, Daniel. She eventually overdosed on a combination of prescription medications in February 2007.

However, there is no sadness in the GUESS campaign with Smith’s daughter. The images feature the beautiful blonde girl wearing a fedora paired with a denim skirt, blue-striped shirt, and white vest. Dannielynn is a spitting image of her dad, but she clearly has her mom’s talent in front of the camera.

Birkhead has kept his daughter mostly out of the spotlight by moving back to his home state of Kentucky in 2007. He made the move after a custody battle for his daughter ensued and several men besides Birkhead claimed paternity of Smith’s daughter.

Once the DNA test was positive, Birkhead devoted himself full-time to raising his daughter. While the modeling job for GUESS is a first for Dannielynn, it is unclear if the little girl will pursue a modeling career beyond the spring 2013 campaign.

The ads will be seen beginning in mid-January 2013 all over the globe on billboards, in fashion magazines and on buses.