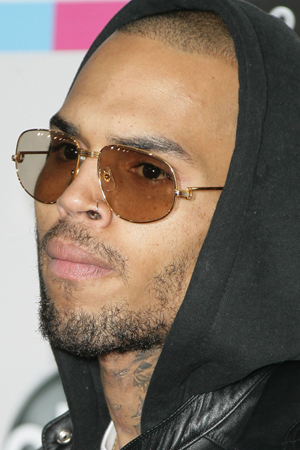 There’s one thing we can all agree on: Chris Brown is vile. The singer and maybe (probable) on-again boyfriend of Rihanna went on a Twitter tirade over the weekend against comedy writer Jenny Johnson.

Johnson, like many reasonable people, is no fan of Brown and has made a hobby of making fun of him on Twitter. Brown apparently saw one of her tweets and went on a ridiculous (and sexist) tirade against her.

“I look old as f**k! I’m only 23…” Brown tweeted on Sunday, prompting Johnson to reply with ” I know! Being a worthless piece of s**t can really age a person.”

Brown came up with a witty retort to that.

Brown eventually stopped and deleted his Twitter account, but not before Johnson got in the last word.

Chris Brown is a violent woman-hater… for Halloween >>

“Okay. I’m done. All I got from that exchange with Chris Brown is that he wants to s**t and fart on me,” she wrote.

That wasn’t the most shocking part of it, though: Now Johnson is receiving death threats from the singer’s common sense-lacking legion of fans.

Chris Brown tries to show that he’s not a “dog,” fails >>

“It’s alarming how many death threats I’m receiving via @ replies. I encourage everyone, including @Twitter to look through them. Not cool,” Johnson wrote on Monday.

A few of those delightful tweets?

“Do u wanna know what im gonna do now ? Im gonna kill that Jenny Johnson for making Chris delete his twitter,” one Brown fan wrote.

“Stfu b*tch honestly, i wanna sit on your face and stab 1235 needles in your eyeball, you son of a motherless goat,” said one classy tweeter.

“I will kill to jenny johnson hateeeeeeee,” wrote another eloquent person.

Johnson’s replies on Twitter are pretty disgusting, but there are plenty applauding her actions. Still, the most delightful messages are the tweets that blame Rihanna for the whole Grammy weekend beatdown in 2009.

“You’re such a disgusting c**t manhater. Chris Brown should have kept your loudmouth a** in check, Rihanna hit him first,” another #TeamBreezy user wrote.

Jay-Z tells Chris Brown he will “end his career” >>

As for all the fans freaking out on Johnson? She has a simple (and normal) reason for hating Brown.

“I have zero respect for a person who seems unapologetic for the terrible crime he committed and shows no signs of changing,” she tweeted.