After a tragic loss, the cast and crew of Dallas are trying to hold it together. Following the death of icon Larry Hagman, they’re clamoring to give J.R. Ewing a fitting farewell. 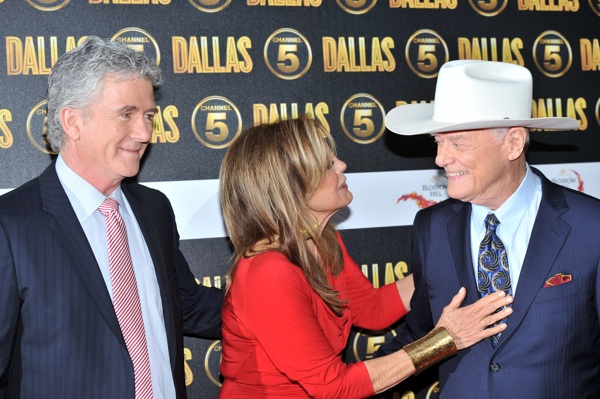 How will the show go on? Larry Hagman‘s J.R. Ewing is synonymous with Dallas. You can’t picture one without the other. Unfortunately, over the holiday weekend, Hagman passed away following a long battle with cancer.

At the time, Hagman — along with co-stars Patrick Duffy and Linda Gray — was gearing up for Season 2 of the Dallas reboot. The series was a summer hit that became must-see TV. It proved that the characters and their soapy drama could stand the test of time. But will it stand the absence of Hagman?

According to EW, sources have confirmed that Hagman will have a steady presence in the upcoming season. They claim the actor had already wrapped “a number of episodes.” But no matter how much footage was shot, they’ll still have to address his passing.

Producers plan to incorporate it into the show. The writers want to give J.R. “the proper sendoff that he deserves.” His castmates have already sent their thoughts and prayers to Hagman’s family.

Jesse Metcalfe, who plays J.R.’s idealistic nephew Christopher on Dallas, recently tweeted, “It was truly an honor to share the screen with Mr. Larry Hagman. With piercing wit and undeniable charm he brought to life one of the most legendary television characters of all time. But to know the man, however briefly, was to know a passion and dedication for life and acting that was profoundly inspirational.”

Dallas is scheduled to return Jan. 28.

How do you think they should write J.R. out?