Comedian Penn Jillette has some mighty harsh words for the Donald and his stint on Celebrity Apprentice in a new book, excerpted on Salon.com. 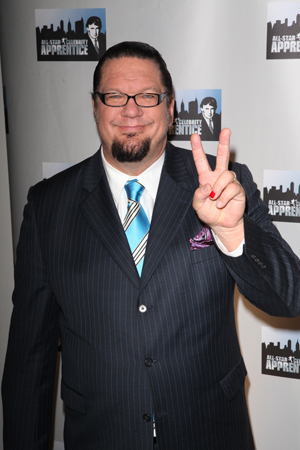 Comedian Penn Jillette, who says he participated in the 2012 season of The Celebrity Apprentice as kind of a “work/study” thing, had some harsh words for host Donald Trump in his new book, calling him a “modern-day Scrooge McDuck,” amongst other things.

Excerpts of Jillette’s book, Every Day Is an Atheist Holiday!, appeared on Salon.com, where the comedian brutally ripped into Donald Trump. His favorite activity, says Jillette, is “pontificating to people who are sucking up to him.”

“When he was into his free-form rants in front of a captive audience, he would talk about articles written about him and defend himself against charges made, as far as I could tell, by random bloggers with a few hundred hits,” Penn writes.

“Attacks that could have no impact on his life at all. It sounded like this cat was Googling himself, being bugged by what was written, and then defending himself to people who were trying to improve their careers by playing a TV game with him.”

The famous boardroom scenes on The Celebrity Apprentice, which seem long and drawn out to the viewer even though they’re only minutes long, actually last for hours because of Trump’s “monologues.”

Donald Trump: No regrets, no fear of “dump Trump” petition >>

Jillette also had harsh words for Clay Aiken, who appeared on the same cycle of The Celebrity Apprentice, and apparently had a private talk with Jillette offscreen.

“If you’ve gotten yourself into a situation when Clay Aiken is going to talk about his feelings with you, it’s time to kill yourself,” he writes. “If it weren’t being documented, you could kill him quickly and bury him in a shallow grave—who’s going to notice?”

When he’s not appearing on reality shows and writing mocking books, Penn Jillette is half of the popular illusionist/mythbusting team Penn & Teller.