It’s Thanksgiving 2006 in the Hamptons and things are getting crazy. Dark family secrets are revealed, enemies are made and new love is discovered. 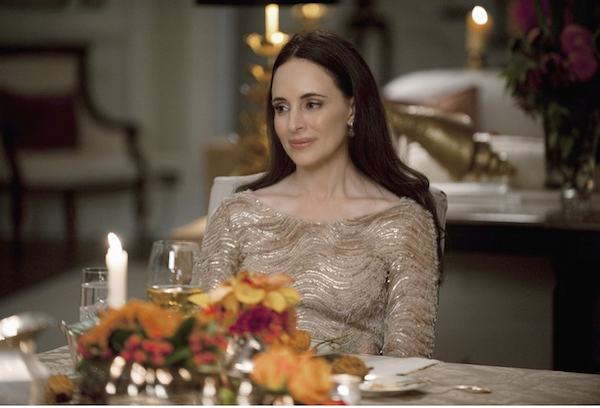 Here are a few things that were different in the Hamptons in 2006: Daniel had hair like a 12-year-old boy, Conrad did not yet completely despise Victoria and Aiden hadn’t broken Emily’s heart yet. Other than that, everyone was just as manipulative and out for revenge as they are in the present day.

It’s Thanksgiving 2006 and Daniel Grayson (Josh Bowman ) is a wide-eyed wannabe poet (his parents will never let that happen) with idealistic expectations, like: his mom and grandmother will be able to get through a dinner together without someone’s life getting ruined. He is very wrong.

It’s been 35 years since Victoria (Madeleine Stowe) has seen her mother, Marian. Marian was the type of woman who married for money and blamed her daughter when her relationships failed. She’s back again with a new wealthy fiance because she’s just about to run out of money. When the two come face to face it’s clear to see where Victoria got her calculating skills from, and after years of practice Marian doesn’t stand a chance against her.

At dinner, Victoria is determined to reveal their family secrets to the unsuspecting fiance. Apparently when Victoria was 15 her mother had her shoot a man who was about to walk out. Then, Victoria was sent to an institution for six months, and when she got out Marian’s new man sexually abused her. Eventually, Victoria was kicked out of the house and never spoke to her mother again. Heavy stuff.

After hearing the story, the fiance dumps Marian and she is left alone and broke without any man to take care of her. Then it’s revealed that Victoria set up her mother: The relationship was fake and the fiance just a paid actor. It’s her own story of revenge — 35 years in the making!

At the same time, Emily (Emily VanCamp) is working with Takeda and meets Aiden (Barry Sloane) in a Russian club that’s known for human sex-trafficking. They are both after the same man, but Aiden’s reason is far more personal. The club owner is the man who kidnapped his sister, Colleen. Aiden and Emily wind up getting chased around the club by a group of deadly Russians and it’s Emily who saves Aiden’s life… twice. Some men might be intimidated by that, but he seems smitten right away. Of course, that’s after he puts a bullet in the club owner’s back. Aiden’s no closer to finding Colleen so Emily convinces Takeda to take him on as a student. And that’s the beginning of their love/hate/love relationship.

Then there’s life for Jack Porter (Nick Wechsler) in 2006: On Thanksgiving his father’s bar gets vandalized and a mobster (yes, in the Hamptons) strong-arms Carl into trading cash for protection. When the mobster puts another small business owner’s daughter in the hospital, the man retaliates and shoots the gangster, but with Carl’s gun. Carl helps dispose of the body and nothing seems to come of it, until the present day. Jack’s new business partner just happens to be that gangster’s son and he looks like he just might be out for revenge, as well.

Those were the mean streets of the Hamptons six years ago and not much is different now. Victoria can still ruin anyone’s life over dinner with a half-smile on her face, Jack will forever be protecting his bar and Daniel is still finding his place in the world (and he’d prefer for it to have nothing to do with Grayson Global). The biggest difference may just be that Emily actually looks happy cuddling with Aiden and she doesn’t even have any plans to destroy his heart, take all his money and have him be convicted of a crime he didn’t commit. How long will those feelings last?