Beauty. Diamonds. Scandal. Passion. Money. Power. All the drama surrounding one of Hollywood’s greatest love stories between Elizabeth Taylor and Richard Burton is told in the biopic Liz and Dick starring Lindsay Lohan and Grant Bowler. 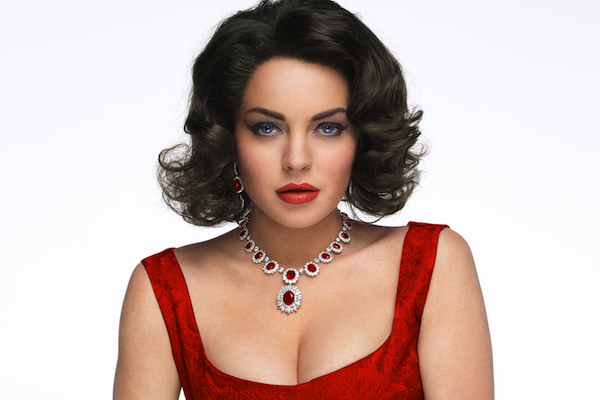 Elizabeth Taylor, the dark-haired beauty who lit up the silver screen, lived an epic life full of triumph and tragedy. Her name is still known throughout the world and epitomizes elegance. While fans fondly revere this movie legend, she is also remembered as the consummate femme fatal who always had the eyes of the world on her every move. This was especially true during the 1960s, when the Academy Award winner began a passionate and complex love affair with fellow actor, Richard Burton. Together, they commanded the international stage and set off a global media frenzy.

Taylor and Burton were Hollywood royalty and had one of the most notorious romances of their time, spanning two decades. They were married for 12 years, from 1964 to 1976, with a brief divorce in 1974. Their fascinating and compelling story comes to life in the new Lifetime original movie, Liz and Dick, premiering Sunday, Nov. 25, which is based on the true story of the couple’s tumultuous love affair. Lindsay Lohan takes on the role of Taylor, and Grant Bowler portrays Burton.

At the Los Angeles premiere of the biopic, Lohan talked about the movie, saying, “It’s such an iconic story of love and defeat and love again. Elizabeth Taylor was such an icon of mine and so many other people’s that I think it was an important film to depict correctly.”

Lohan also pointed out similarities she thinks she shares with Taylor, explaining, “She grew up with her Mom mostly and so have I, and then also living your life in the public — I think that’s the main one.”

During a TV appearance, Bowler explained his initial reaction after finding out he was being considered for the part of Burton.

“I had concerns about playing him — he was a childhood icon of mine. I really wanted to go play and see if I could get anywhere near his voice, his tenor, his tone and his pitch,” he said. 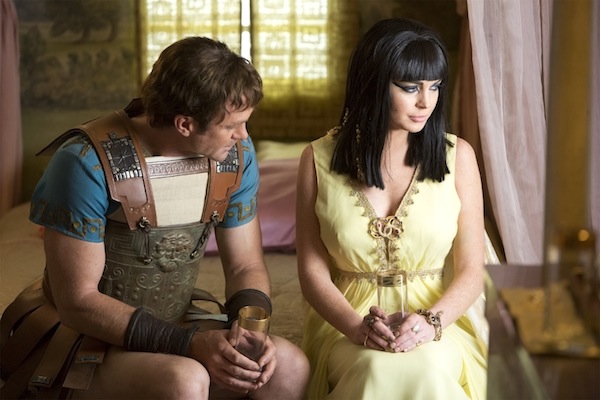 Bowler added, “When I felt confident with that, I was very, very interested in playing the role. I’ve always, always been a huge admirer of Burton.”

According to Burton‘s published diary, he met Taylor in 1953 at a pool party at the home of Stewart Granger and Jean Simmons in Bel Air. Taylor was married to her third husband, Michael Wilding, and Burton was married to his first wife, Sybil Williams. At the time, the Welsh actor was making his debut in Hollywood films. A gifted actor, he was smart and charming and spoke in a very distinctive voice.

In his book, A Passion For Life: The Biography of Elizabeth Taylor, Donald Spoto included an excerpt from Burton’s diary that recalled meeting Taylor that summer day.

“She was, I decided, the most astonishingly self-contained, pulchritudinous, remote, removed, inaccessible woman I had ever seen. She spoke to no one. She looked at no one. She steadily kept on reading her book. Was she merely sullen? I thought not. There was no trace of sulkiness in the divine face.”

But Burton couldn’t ignore her beauty, humorously writing, “Her breasts were apocalyptic, they would topple empires down before they withered. Indeed, her body was a miracle of construction and the work of an engineer of genius.”

Spoto explained that Burton approached Taylor and heard her cursing, to which Burton said, “You have a remarkable command of Old English.”

Taylor replied, “Don’t you use words like that at the Old Vic?”

Burton answered, “They do, but I don’t. I come from a family and an attitude that believe such words are an indication of weakness in vocabulary and emptiness of mind.”

Spoto wrote that years later, Taylor said, “I didn’t fancy him then; I thought he talked too much.” 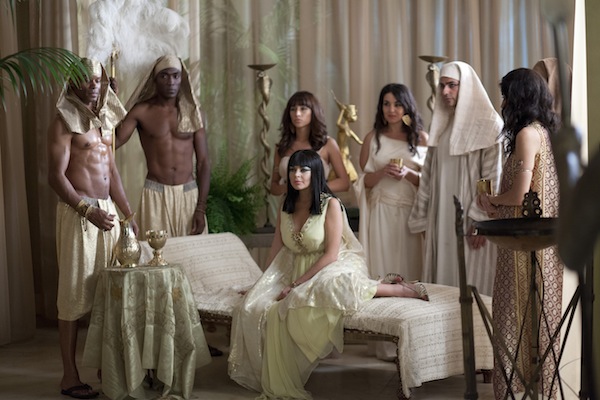 In 1961, Taylor and Burton were reunited on the set of the blockbuster film Cleopatra. The picture was truly historic, as Taylor was the first female actress in Hollywood to earn $1 million for a film. The pair portrayed lovers on screen, with Taylor in the title role and Burton as Mark Antony. Soon, life imitated art when the Taylor-Burton romance ignited in Rome. Taylor was then married to her fourth husband, Eddie Fisher, while Burton was still married to Williams; however, he had quite a reputation for being a ladies’ man.

Eventually, both received divorces, and they married in March 1964. The newlyweds continued their roller-coaster romance as they made movies together, enjoyed a glamorous lifestyle, jetted around the world, and constantly surrounded themselves with extravagance. They also drank excessively, prompting many private and public brawls.

According to Spoto, Taylor once recalled her tempestuous relationship with Burton by saying, “I adore fighting with him. There are all sorts of screaming matches, shouting and yelling, and it’s rather like a small atom bomb going off — sparks fly, walls shake, floors reverberate.”

Over the years, Taylor amassed an expensive and gorgeous jewelry collection, including the famous 69-carat diamond Burton gave her in 1969, which soon became known as the Taylor-Burton Diamond.

In 1976, Taylor and Burton divorced for a second and final time. In total, Taylor had seven husbands and Burton had four wives, but their time together continues to captivate generations. Swarmed by paparazzi worldwide, the fiery couple was one of the most famous, publicized and celebrated of its day. The Taylor-Burton relationship has gone down in history as one of Hollywood’s great love stories.

Read more about Liz and Dick