Psy surpasses Justin Bieber for the most-watched video on YouTube by over 2 million views! Can Beliebers take the title back? 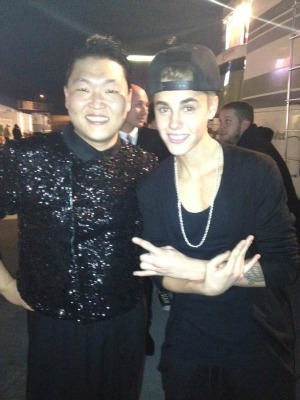 Justin Bieber gave up one of his titles Saturday, as Psy surpassed him as the king of YouTube.

“Rapper Psy on Saturday edged out the teenage pop star for the distinction of most-watched YouTube video ever, netting more than 806 million views,” said CNN. “Justin Bieber, who was first discovered on YouTube by a talent scout in 2008, had previously held the crown with just under 804 million online visitors.”

According to CNN, in October, the video for “Gangnam Style” was given the title of most-“liked” video on YouTube by the Guinness Book of World Records. The song was named for Psy’s neighborhood in South Korea.

“I described the district as normal and calm in the daytime and going insane in the nighttime,” the rapper told CNN. “That’s what the lyrics are about.”

Psy appeared Sunday at the American Music Awards, and halfway through the song he went into a version of MC Hammer‘s “Too Legit to Quit.” MC Hammer himself then joined Psy on stage.

“We should’ve known something was up when Psy took the stage at the American Music Awards in a pair of Hammer pants,” said CNN.

MC Hammer said he was introduced to Psy by Justin Bieber’s manager, Scooter Braun, and they decided on the collaboration.

“Psy is fantastic. He’s shifted the planet,” Hammer told CNN. “He’s got the whole world dancing. And it’s a rarity in this world. Only four people made that happen in history — James Brown, Michael Jackson, yours truly and Psy.”

Psy didn’t feel nervous about dancing with MC Hammer during his namesake dance.

Beliebers are undoubtedly going to work to reclaim the YouTube crown, and with all the “Gangnam Style” parodies out there taking views from the original, they may actually have a shot.