Halle Berry was spotted at a children’s show with her daughter, Nahla, after the big Thanksgiving Day brawl between her ex-boyfriend and her current fiance. 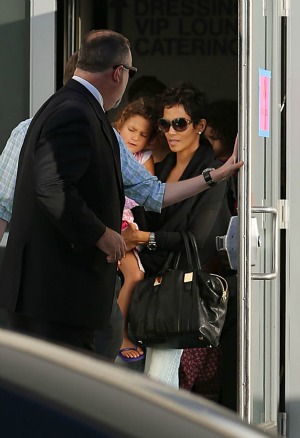 It was almost business as usual on Friday for Halle Berry as she took her daughter, Nahla, to the children’s show of Yo Gabba Gabba! Live at the Nokia Theatre in Los Angeles. Nahla is at the center of a custody dispute.

Berry and her daughter enjoyed the entertainment, as a fellow attendee told RadarOnline.com, “At one point Nahla was sitting on Halle’s lap, and they both seemed to be having a great time.”

While the actress tries to keep a sense of normalcy for her 4-year-old, the lingering effects of the Thanksgiving Day brawl between her ex-boyfriend, Gabriel Aubrey, and her current fiance, Olivier Martinez, were definitely witnessed.

The Oscar winner has hired a security guard to escort her and the rest of her family whenever they go out. TMZ is reporting that the guard is armed and that Berry is taking Thursday’s events very seriously.

Aubry, a former model, reportedly started the altercation, and Martinez reacted in self-defense. As a result, Aubry was arrested for battery. However, he remains out on bail until his Dec. 13 court date. A protective order is in place to prevent Aubry from getting within 100 yards of Berry, their daughter and Martinez.

Both Aubry and Martinez were spotted by the LA paparazzi on Friday, and it seems like the French actor got the upper hand. While he came away with an injured hand and some bruising on his neck, TMZ has exclusive photos of Aubry with a pretty big shiner around his left eye. He also has a broken rib.

How the altercation will affect the ongoing custody case over Nahla is unclear, but you can be sure Berry has her lawyers working overtime with this week’s unfortunate events.