Viewers of the Macy’s Thanksgiving Day Parade were surprised to see an Elmo balloon floating along, considering his voice is in disgrace. But Sesame Street seems determined to, heh heh, rise above the haters. 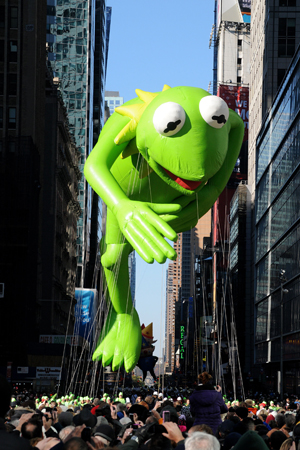 Elmo endures: a giant floating balloon of the figure appeared with other Sesame Street pals in the annual Macy’s Thanksgiving Day Parade in New York City, despite the red-hot bucket of troubles voice of Elmo Kevin Clash has landed himself in recently.

“I wouldn’t really expect anything other than bright and all-smiles from the PBS bunch, but if dark overtones showed themselves this year after the recent shocking news about one of their puppeteers, I couldn’t blame them,” wrote Entertainment Weekly reporter Emily Rome. “But there was no sign of that at all as puppets and humans alike sang, ‘Oh, I gotta keep my head up high / Nothing’s gonna get us down.'”

Voice of Elmo hit with another sex suit >>

In other parade news, the Snoopy balloon was absent. There’s been a Snoopy balloon in every Thanksgiving Day parade since 1968, but this year Snoopy was downgraded to a “Snoopy’s Dog House” float with Woodstock, Linus and Lucy. No Charlie Brown? Not on the float — he’s a balloon this year. And in case you’re wondering who Woodstock is, it’s the little yellow bird that hangs out with Snoopy. Yeah, I forgot too.

As in other years, Mickey, Kermit, Sonic the Hedgehog and the Pillsbury Doughboy (??) floated along the parade route.

New balloons this year included a Papa Smurf, Hello Kitty piloting a plane and Elf on the Shelf, the appearance of which doubtless made many parents clap their hands to their heads in horror: Elf on the Shelf is a new-ish family game/torture ritual that forces parents to hide the Elf on the Shelf in a new spot each night of December. Kids love it. Parents hate it. Thanks, Macy’s, for reminding the kids it’s Elf on the Shelf time again!

Meanwhile, the parade itself is under fire, and not just for its balloon choices: Slate reported this week that the earth’s supplies of helium will be depleted in 40 years if we continue our current rate of consumption. And we don’t know how to make more. Kinda takes the “yay!” out of the parade, huh?