Suri Cruise flew to London to spend Thanksgiving with her Dad, beginning the first of many awkward holidays with non-custodial Tom. 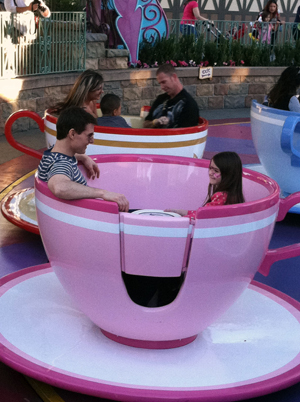 Suri Cruise had a typical holiday for a kid from a divorced family this year: She celebrated Thanksgiving early with her mom, then flew to spend the actual holiday with her dad, Tom Cruise.

The 6-year-old had one big dinner with her mom and friends in New York on Sunday, then flew to London on Tuesday to see her dad and “enjoy the holiday with him,” the New York Daily News reported.

Tom Cruise suing for $50 million for claims about Suri >>

Now that is an enjoyable holiday! You have a big dinner on a weird day when no one else is doing it (except for other kids who get to have two Thanksgivings — yay!), and then jump on a plane to fly many hours to your dad, who, the New York Daily News reports, hasn’t seen you in three months.

Yes, that makes for some solid dinner-table conversation with a small child, all right.

Meanwhile, Just Jared reports Katie Holmes flew home to Toledo, Ohio, to be with her own folks. Hard not to extrapolate that Katie was lonely and bummed out without her daughter.

Suri and Tom Cruise have been video chatting >>

And hard not to imagine the awkwardness Suri must be feeling in London, away from her friends, her mom, her stuff. Better get used to it, Suri, because this is what “visitation” is all about.

In other Cruise news, in October Tom filed a $50 million suit against two magazines that accused him of “abandoning” Suri while he worked.