She’s smart, beautiful, funny and gets to star alongside Anthony Hopkins and Helen Mirren in the much-anticipated Hitchcock flick. Strangely, we don’t hate her. As a matter of fact, after chatting with the Ivy League–educated actress about everything from her beloved stint on Boston Legal to being totally freaked out by horror films, we’re a little psycho about Tara Summers. 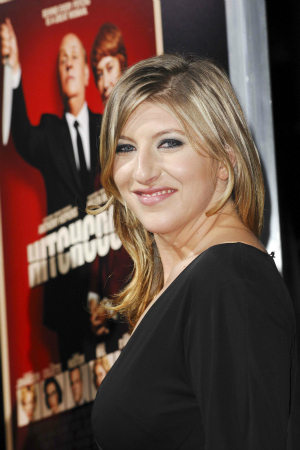 SheKnows: You’re a London girl by birth… what brought you to the States?

Tara: I went to university here, to Brown. My mum actually lives out here, so I’ve been coming back and forth since I was a kid, and I came back on vacation after Brown and ended up getting a job! So I sort of stayed here by default.

SheKnows: Well, that turned out to be a nice extension…

Tara: Yeah, I actually broke up with a boyfriend in London, and I decided I had to be dangerous for a minute. And then, within about five days of getting to Los Angeles, I got a pilot, so that worked out rather well.

SheKnows: You majored in history at Brown, not a subject for the faint of heart! Have you always been a history buff?

Tara: I always had an interest in good stories. I wanted to be an actress, but my dad said, “No, you need to get a degree.” So, because I was so fascinated with storytelling, I thought history would be my wisest subject to choose.

SheKnows: You returned to London after Brown to attend the London Academy of Music and Dramatic Art?

Tara: I got a graduate degree from there in theater, which was still sort of that compromise with my dad. “I got a history degree. Can I now go study theater?” And he said, “Yes, go do it.” And I was happy to be doing plays in England — I probably would have stayed there the rest of my life, had I not had this awful breakup and had to leave the country. (Laughs)

SheKnows: What was your first professional acting role?

Tara: It was a little role in a big movie, which was in England, called What a Girl Wants. When I came back out here, I got a pilot, but the pilot didn’t actually get picked up. So I stayed, and very shortly after that, I met David Kelley, and he created the role of Katie Lloyd for me on Boston Legal.

SheKnows: You seem to always manage to keep your head above water. Do you have any advice for actresses like your What a Girl Wants co-star Amanda Bynes, who can’t seem to steer clear of the drama?

Tara: I think that there is a benefit to getting more and more successful the older you are, because you have a solid foundation to begin with. I think with some of these child actors that they get a bit lost because they get swept up in all the attention and the drama and things go, you know, slightly wrong. It’s important to stay very grounded and build a strong support system for yourself and have hobbies outside of the movie business.

SheKnows: Would you consider Alfie your first big break in Hollywood?

Tara: Hmm… I would say Boston Legal really was. That was a huge break because it was already a very well-established show with amazing actors — James Spader and Candice Bergen and William Shatner — so that was a real lesson for me. I think being surrounded by people like that who have so much dignity and integrity and aren’t particularly fame hungry — that was a very good introduction into how to hold your head up with grace and be a working actor in Los Angeles without getting sucked in or seduced by the Hollywood scene.

SheKnows: Having worked with Shatner on a relatively serious show, do you get a little giggle when you see him on Priceline commercials now?

SheKnows: Speaking of co-stars, you get to share the screen with Anthony Hopkins, Helen Mirren, Scarlett Johansson and Jessica Biel in Hitchcock, which comes out on Nov. 23. How psyched were you to land the role of Rita Riggs?

Tara: Beyond thrilled! I loved Hitchcock — I’ve seen pretty much every one of his films. I was really, really euphoric to get that part.

Tara: She was a real-life costume designer for Psycho and The Birds. I know from being an actor myself that you get quite close to the people that surround you on set, like the people who do the makeup and the hair and the costumes — she had a lot of inside knowledge about what was going on in the business. She was a real bohemian, who had long black hair and wore very out-there clothing for the ’50s when everyone else was so put together. She was a true original!

SheKnows: How different is Rita Riggs from your upcoming recurring role on Sons of Anarchy as Karen Dunhill?

Tara: Very different! Karen is a nonprofit-working pediatrician who has no idea what’s going on in the world of Charming and is recruiting Maggie Siff’s character, Tara, to work with her. She is really naive when it comes to the fact that Tara is married to Jax — they’re in this very dirty underworld, a sexy biking gang, and I come in as this very straight-laced doctor.

SheKnows: So between Hitchcock and Sons of Anarchy, you’ve been tackling some pretty dark roles. Can we expect to see you in any horror movies soon?

Tara: I prefer comedy, personally, and I love romantic comedy. I’m too scared to watch scary movies — I have to watch certain things with the sound off! So I could do a scary movie, but I don’t think I’d ever be able to go see it or promote it. I’m a chicken… I’m scared of everything! Sometimes when I’m watching Sons of Anarchy and they show previews for American Horror Story, I’m like, “Look away, look away!” That show scares the sh** out of me! (Laughs)

SheKnows: In addition to SOA and Boston Legal, which we touched on earlier, you’ve had parts on hit shows like Damages, Ringer, Private Practice and CSI. Does any one stint stand out as your favorite?

Tara: Damages, because I was such a fan of the show. I think it was a totally underrated show that didn’t get as many viewers as it should have, because it was really quite a masterpiece I thought.

SheKnows: All right, random trivia time: Your grandmother, Fritzi Gordon, was a world champion bridge player. Would you totally destroy us in a round of cards?

Tara: Yes! She won the European world championship seven consecutive years and was in the Guinness Book of World Records. She taught me cards at a very early age — that’s the only way she wanted to hang out. She smoked and played cards — she was terrifying (laughs). She’s where I got a bit of my competitive streak; I love to play games myself. But she was a very powerful and intimidating woman!

SheKnows: We can’t wait to catch you in Hitchcock and on Sons of Anarchy. Where can we find you after the new year?

Tara: Starting in February, you can find me doing a couple of episodes on a new TNT show called Monday Mornings, which is from David Kelley. It’s brilliant and beautiful and just as good and just as poignant and moving as his other works. I’m such a fan of his, so it’s such an honor to work with him again.