Now that Glease is officially over, what will the New Directioners focus on? Oh, don’t you worry. There’s always something causing a hubbub at McKinley, and this week will be no different. 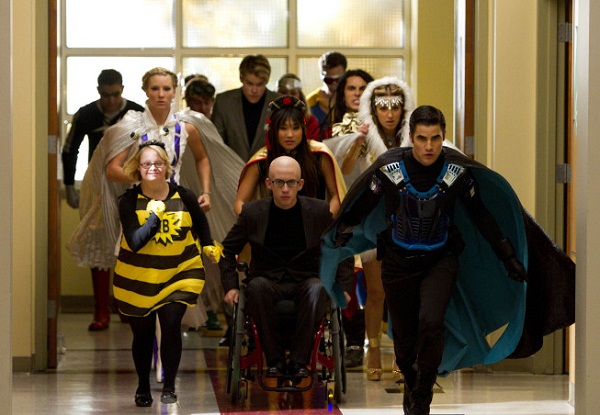 Blaine’s superhero club is about to quadruple in size. That’s okay, though, because the kids of New Directions are going to need all the help from superheroes that they can get. Why? The Warblers have sent a menacing message to the gang: They’re coming after them, and the boys won’t stop until they’re national champs. Are they prepared for an epic musical throwdown? That sure seems to be what The Warblers have in mind.

Even superheroes have weaknesses, you know. The founder of the club is proof of that when he runs into The Warblers. (You know, his old glee club.) When they tantalizingly slip on the Warbler blazer, Blaine (Darren Criss) is sucked back into his former prep school days. Will he sing with the Warblers once more? Well, duh. It’s Glee. 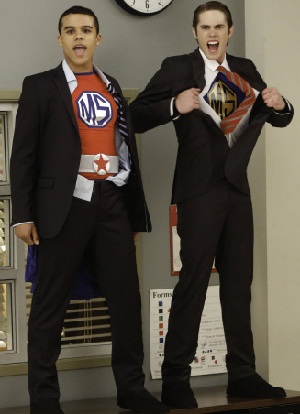 That won’t be the only unexpected pairing, though. It looks like Ryder and Jake will also pair up for a duo. Will it have anything to do with the fact that they’re both absolutely “in like” with the super sweet new girl, Marley? Probably.

Will Asian Persuasion, the Almighty Treble Clef (Cory Monteith), Tarantula Head, the Beast Master, the Human Brain (Heather Morris), Blonde Chameleon and the rest of the superhero club (aka New Directioners) be able to come together to defeat The Warblers? Not without the help of the newest members… and so far it looks like none of them have found the right superhero persona.

Cross your fingers, Gleeks. This week may play a determining factor in the year ahead for the Lima, Ohio, William McKinley High School Glee Club.