The two artists probably couldn’t be any more different, but someone found their similarities and mashed up two of their songs back in 2011. Lead singer Corey Taylor of Slipknot has been trying since then to get the Biebs to play the song live. 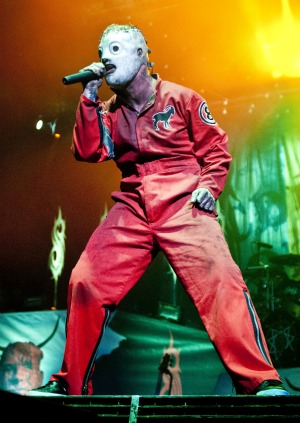 Justin Bieber seems to have something about him. While it may be hard to believe, he has many fans who aren’t teenage girls.

“Tween pop superstar Justin Bieber is hardly at a loss for fans, given his millions of rabid ‘Beliebers’ as well as famous supporters ranging from Red Hot Chili Peppers frontman Anthony Kiedis (who ‘cried twice’ during Bieber’s Never Say Never documentary) to Johnny Depp, whose daughter Lily-Rose was ‘touched’ when the young singer gave her a pair of purple glasses, with Depp labeling the star ‘a sweet guy,'” said Scott Sterling with WHFS in Baltimore.

But now he has a fan from a new area of the music industry. Corey Taylor of hard-rock band Slipknot admitted to Revolver in a recent interview that he respects the Biebs. He spoke about a mash-up of Slipknot’s song “Psychosocial Baby” with Justin Bieber’s “Baby” that someone uploaded to YouTube in March 2011.

“I know Justin wasn’t responsible for it, but I just thought it was so cool. Everybody thought I’d be pissed about it, but I was blown away… I give him respect,” Taylor told Revolver. “He’s a very talented kid and he goes above and beyond for his fans.”

The mask-wearing group’s fans are probably as far from Beliebers as you can get, but Taylor tried to get Bieber to collaborate with him live at a recent show.

“I was in Baltimore on my book tour and Justin was nearby in Washington, D.C. I tried to get him down to my reading because I wanted to try to do an acoustic version of ‘Psychosocial Baby’ together,” Taylor told Sterling. “But he was actually visiting children’s hospitals. You can’t say anything bad about a guy who’s visiting children’s hospitals.”

The clip now has over 12 million views on YouTube, and we can only hope the live collaboration may happen someday.