The Community cast is downsizing. In an expected move, Chevy Chase is leaving the show. He’s the first series regular to jump ship since the show’s 2009 premiere. 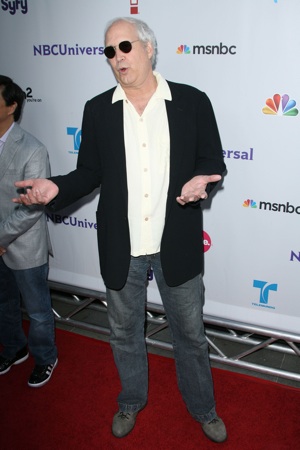 We should have seen this coming. NBC’s Community and Chevy Chase are severing ties. The veteran comedian is exiting the series after three and a half seasons.

It’s been a rough year for the actor, who’s openly expressed his issues with the show. Therefore, it was only a matter of time before someone cut the cord.

According to Deadline, the decision between Chase and the Community producers was mutual. The show’s fourth season has yet to air, and Chase will still appear in most of it. The majority of the 13-episode season has already been filmed. Chase will only be absent from one or two episodes.

Over the past year, Chase has made it pretty clear that he wasn’t happy at Community. First, there was the confrontation between him and former showrunner Dan Harmon, which included a profanity-laced voicemail. Then, when speaking to The Huffington Post UK, he referred to the series as “a big mistake!”

He continued, “I just sort of hung around because I have three daughters and a wife, and I figured out I might as well make some bread every week, so I can take care of them in the way they want… The hours are hideous, and it’s still a sitcom on television, which is probably the lowest form of television.”

Well, it looks like he got his wish. Even though Chase is the veteran in the cast, his exit shouldn’t cause problems. His character, Pierce Hawthorne, is more of a supporting character. Plus, they still have fan favorites like Joel McHale (Jeff),  Donald Glover (Troy), Danny Pudi (Abed) and Alison Brie (Annie).

What do you think of Chase’s exit? Will he be missed?