The stars hit the red carpet last night for the Los Angeles premiere of Hitchcock and SheKnows was there to catch all of the action. 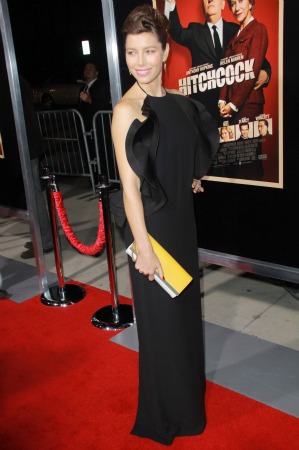 Last night’s red carpet for the Los Angeles premiere of Hitchcock was chilly — or should we say “chilling” — as the stars came out to honor the master of suspense. The film focuses on the making of Alfred Hitchcock’s classic 1960 film Psycho in addition to the working and personal relationship with his wife, Alma.

The movie stars Anthony Hopkins as Hitchcock, Helen Mirren as Alma, Jessica Biel as Vera Miles and Scarlett Johansson as his beloved muse, Janet Leigh. SheKnows was there last night and we got the inside scoop on the making of the film.

First down the red carpet was none other than the lovable Jerry Mathers, who starred in the iconic television role in Leave It To Beaver. What a lot of people don’t know is that he was a part of the Hitchcock film The Trouble With Harry. His favorite memory involved the legendary director addressing the child star as “Mr. Mathers” each time he spoke to him. Mathers always thought Hitchcock was referring to his father.

Jamie Lee Curtis also walked the red carpet with her gorgeous sister, Kelly, to represent their mother’s legendary work with Hitchcock. Curtis told SheKnows, “Don’t tell anyone, but this is an embargoed photo” that she showed us on her iPhone. It turned out to be a side-by-side photo of her mother, Janet Leigh, and Johansson playing Leigh in the film.

“Don’t they look alike?” she asked us. Indeed they do.

Other notable stars included Biel who was dressed in a stunning black ruffled Gucci dress. She animatedly talked to the press and discussed her wardrobe for the film, which involved lots of girdles — common in that time period.

She did joke, “I would have stolen that girdle, and pretty much everything that I could have.”

Toni Collette and Helen Mirren were the final stars from the film to arrive and they didn’t disappoint. Colette — who plays Peggy, Hitchcock’s personal assistant for four decades — wore a stunning red Alex Perry cocktail dress. The actress gushed about working with the queen herself, Helen Mirren, and told SheKnows, “I want to be Helen when I grow up.” We do too, Toni!

Mirren, who wore a black and gold lace Dolce & Gabbana dress for the premiere, exuded all of the elegance of a Dame and an Oscar winner.

She was drawn to the role of Alma because “I had no idea about Hitchcock’s private life.” She used the 2003 book, Alma Hitchcock: The Woman Behind the Man, written by the couple’s daughter Patricia, to understand who the woman really was.

On this night, though, it was the man behind the woman. We found Mirren’s husband, director Taylor Hackford, lurking in the shadows supporting this wife’s big night. It seems like Mirren had all of the inspiration she needed right there on the red carpet.