Polish model and reality star Joanna Krupa is back on the market, she confirmed this week. 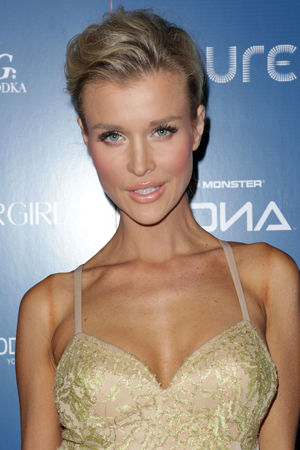 Real Housewives of Miami stunner Joanna Krupa is back on the market after breaking up with fiance Romain Zago, she confirmed to In Touch earlier this week.

“We got in a huge fight, and I just pretty much got fed up with it,” the 33-year-old told the magazine. “He loves me to death, he wants to be with me, but there’s something that’s holding him from committing 100 percent.”

Maybe other women? Just a thought. They also fought constantly on the show, as fans no doubt noticed over the course of the season.

However, the Poland-born model hopes her breakup won’t affect her status on the Real Housewives franchise.

The real life of Real Housewives of Miami’s Lisa Hochstein >>

“Despite all the drama, of course I would love to,” Krupa told E! News of returning for another season. “I signed up knowing that it’s one of the biggest franchises and there’s also a lot of drama. But if you get seven girls in a room, somebody’s going to start up something.”

And if they don’t want her back?

“I don’t have any regrets,” she said. “You live and learn. Miami is just another platform in my career, and I appreciate it.”

As for the other projects? The blonde stunner made waves last week when PETA published an ad of her wearing a merkin — and not much else. She later told Bravo that she did it because it’s a good cause.

“If there’s no controversy behind it, people are going to blink their eye and move on,” she added of PETA‘s penchant for the shocking. “We’re like, ‘What can we do that’s fun but is also controversial and sends a message for those that don’t realize the cruelty?’ I’m against fur obviously, but I’m against any cruelty. As a human, if they eat meat I’m not the type to dictate what they can and can’t do, but we have to know the difference. What I am fighting for is to stop cruelty and torture of animals.”

And fighting for a good publicity op, right Joanna?