Kenny Chesney is set to celebrate Thanksgiving on FOX with a halftime performance at the Dallas Cowboys vs. Washington Redskins game. 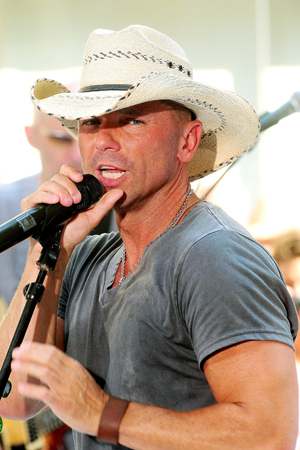 Thanksgiving is for three things: Food, family and football! Now we can add country superstar Kenny Chesney to that list, because he’s set to perform on Thanksgiving day during halftime of the Washington Redskins and Dallas Cowboys game.

Chesney, 44, will be on hand to perform his current hits to promote the opening of The Salvation Army’s Red Kettle season.

“This is a time of year when many people are in need of a helping hand. I’m excited to partner with The Salvation Army and the Dallas Cowboys to encourage the American people to help the less fortunate,” Chesney said. “I hope my music will elevate awareness for the Red Kettle Campaign, and in the end, help provide a warm meal, clothing or a bed for someone this holiday season.”

Football has a big part in the Tennessee native’s life: He’s referred to it in several of his songs, including “The Boys of Fall.” These days, though, he’s in promotion mode for his latest release, Welcome to the Fishbowl.

Kenny Chesney: I wanted to be George Strait >>

“I can tell you this album was unlike any other just for the emotional journey I went on to make it,” Chesney told Reuters earlier this year. “The songs are very personal. Once I heard them all together I realized the thread of searching was there. This is the most vulnerable I’ve ever been as an artist on a record.”

The Washington Redskins vs. the Dallas Cowboys is scheduled for 4:15/3:15c on FOX.