CNN’s live feed of Obama’s speech catches Secretary of State Hillary Clinton checking out for a little bit of it. 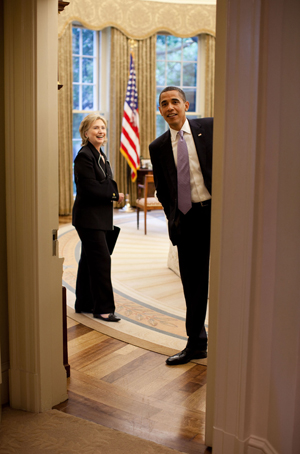 So maybe international travel doesn’t agree with Hillary Clinton: The Secretary of State was caught by CNN’s cameras snoozing during a speech by President Barack Obama.

President Obama, on a diplomatic swing through East Asia, was delivering a speech at Myanmar’s University of Yangon in Rangoon Monday afternoon, according to Myanmar time.

The speech aired live on CNN at 2:30 a.m. in the United States and revealed that Hillary Clinton nodded off during a certain point in the speech.

Mediaite reported that “while Secretary of State Hillary Clinton hung in there for about the first half-hour, she eventually succumbed to what appeared to be a deep meditative state.”

Maybe she was just deep in thought?

Kinda doesn’t look like it. She’s still with her eyes closed for a good long while before reviving herself and rubbing her nose sleepily.

“Really, though, who could blame her?” asks Mediaite reporter Tommy Christopher. “I don’t know a single reporter who hasn’t nearly passed out in the East Room in the middle of the day during a presidential speech… the President’s delivery can be quite lulling. I can’t imagine what it’s like to sit through one jet-lagged by a half a day.”

Yes, it should be noted that Clinton had been at a wine tasting in Australia before flying to Myanmar to listen to a speech about human rights at 2:30 in the morning. Who among us could stay awake under those circumstances?

Still, it’s amusing to watch Clinton slowly drift off on live TV. Give that woman an afghan and some slippers, somebody!

39 mins ago
by Summer Cartwright