Reporters on Rihanna’s 777 Tour savaged the singer for her treatment of them; she gives a sideways apology that sounds more like a bunch of lame excuses. 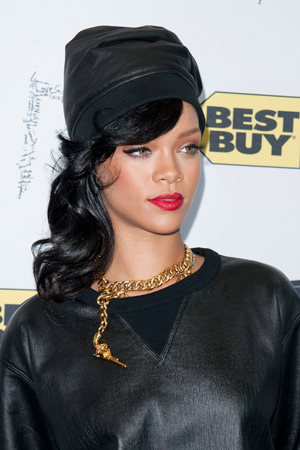 After scandalous reports on Rihanna’s chaotic 777 Tour leaked out from embittered journalists, she apologized to them. Sorta.

“I know you guys got barely any dirt,” Rihanna said after emerging from her private room aboard the plane full of journalists, a mere 30 minutes before the plane landed back in NYC early Wednesday morning, ending the tour.

“But I had to be good. I still sound like sh*t. It’s impossible to spend time with everybody, and I’m sorry I didn’t. Usually I will be partying back here [in coach], balls to the wall. But I had to pay attention and take care of my health since I was on the plane all the time.”

Did any of the reporters ask Rihanna why she was taped shopping for lingerie in Paris while the reporters sat waiting on the plane for hours? (Anyone else flashing on the scene from Sid & Nancy where Chloe Webb exclaims, “Sid got me lots of underwear and it’s all French!” No?)

Nah, says Fuse TV’s Jason Newman. The abashed reporters sent her “probing questions like, ‘Will you be playing Ireland next year?'”

Battle for Queen B: Minaj & Rihanna tied for most AMA Nominations >>

“To many on the plane, it felt too little too late as eyerolls and groans replaced last week’s enthusiasm,” Newman writes. “A week ago, she was the singer ready to hang with fans. Now she was the dad who missed all his son’s little league games and showed up after the championship with ice cream.”

According to tweets and stories filed by the journalists on the tour, Rihanna barely associated with the reporters, who were also treated to multi-hour waits on the plane, as well as on busses not equipped with bathrooms.

But Ri-Ri had to take care of herself. Okay!