Norman Lear is best known for such 1970s TV gems as All in the Family and The Jeffersons. But he can’t sell his sitcom script about older people. 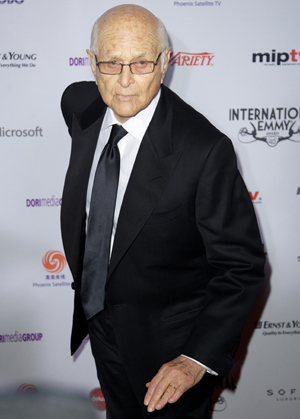 He was huge in the 1970s, with massive hits such as One Day at a Time and All in the Family. But though his new script is choice, the networks all run. Why? It’s about older people.

“Everybody thinks it’s funny, but no one will go near the demographic,” says iconic television writer and producer Norman Lear, who was ubiquitous in the 1970s but can’t get a show made today.

In a Q&A with Ryan Murphy (Glee, American Horror Story) at a luncheon honoring the 40th International Emmy Awards, the still-vital 90-year-old Lear complained that the networks won’t make his latest show because it’s about seniors.

“I wrote it. It’s funny. Everyone likes it,” Variety quotes Lear as saying. “There are plenty of people out there between 50 and 100.”

True. But it’s no secret that networks are practically obsessed with viewers ages 18-49, almost discounting ratings outside that “key” demographic. Certainly few shows are pitched at those older than age 49, and seniors are almost absent from network shows from sitcoms to police procedurals.

Lear said he’s “not sure that one Betty White” represents his entire generation, and says if he can’t get a show made starring older characters, maybe no one can.

It’s not as if Lear is a white-hot new talent. His glory days occurred in the age of avocado green and harvest gold, when Archie Bunker was the voice of every conservative who’d wondered why a long-haired fella was trying to look so much like a girl.

Still, it makes you wonder why the networks are ignoring the giant group of baby boomers. More than 35 million Americans are age 65 or older, and the U.N. Population Division predicts that 20 percent of our population will be 65 or older by 2035.

Older people watch TV, right? They buy stuff! And if a show is funny or interesting, viewers will watch, no matter how old the characters are.

Doubt me? Two words: Golden Girls. It’s still shown daily on the Hallmark Channel more than 25 years after it premiered.

By the way, Lear said his two current favorite shows are Mad Men (showrunner Matt Weiner is a pal) and The Daily Show with Jon Stewart.

Movin’ on up to heaven: Sherman Hemsley dead at 74
Bad-ass females gallery
Heather Locklear’s hospital had other famous ODs