World-class competitive eater Takeru Kobayashi can put back food like it’s nobody’s business! Here are a few tips for purveying Thanksgiving’s delectable dishes T.K. style and walking away as un-puffy as Mila Kunis. 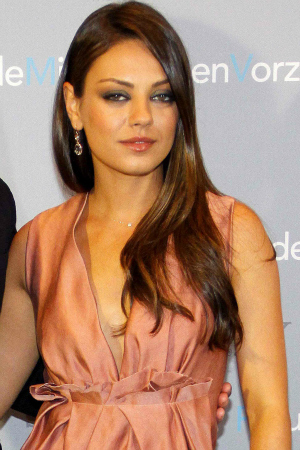 You’d be hard-pressed to find a person who doesn’t look forward to the feast associated with Thanksgiving each year. While we don’t advocate tossing down a dozen hot dogs in the blink of an eye as Kobayashi could, it’s also not a good idea to deny yourself a culinary treat or two on Thanksgiving. Kunis — who has been quoted saying “I’m a huge foodie; I love food!” — enjoys what she eats and then balances it out with Pilates several days a week.

And, while you might think Kobayashi starves himself leading up to eating competitions to create an ample appetite, quite the opposite is true. He never skips meals before a competition!

The same principle should apply to the average Thanksgiving eater — if you avoid eating beforehand, you are much more likely to overindulge and feel miserable afterward.

If you’re as serious about this holiday’s mealtime as Joey from Friends — remember his “Thanksgiving” pants? — at least aim to get the most bang for your proverbial caloric buck. Try to have single servings of the unhealthier foods; go back for seconds of lighter fare. The good news is that your meal’s main attraction is a pretty good place to start: Turkey is rich in protein and low in fat.

Earn even more health points by using low-sodium broth instead of butter and salt during preparation of your poultry. Opt for sweet potatoes over regular baking potatoes; not only are they lower in fat and carbs than regular baking potatoes, but they are also rich in fiber and chock-full of vitamins and minerals. If you partake of pie, pick fruit or pumpkin, as these pies typically have fewer calories than chocolate or nut varieties.

Just try to remember everything is better in moderation… nobody wants to see you in the kitchen doing the “Kobayashi shake” (T.K.’s trademark wiggle to make room for more food).

Don’t feel bad if you just have to make your grandma’s mashed potatoes and gravy — you certainly won’t be the only one indulging in favorite family recipes. But if you could do without the side of guilt, consider swapping out a few ingredients here or there to shave calories and fat. Instead of using butter in your mashed potatoes, pack them with flavor courtesy of low-sodium broth, herbs or roasted garlic. Cut the oil in your classic green bean casserole by topping it with toasted almonds instead of fried onions. In dips, use Greek yogurt instead of sour cream. And, although it sounds like sacrilege and we’re pretty sure even Mila Kunis would roll her eyes at this advice, you can save major calories by removing the skin from your turkey.

She may love food, but Mila Kunis most likely didn’t land at the top of Esquire‘s Sexiest Woman Alive list by eating without abandon. Rather, the 5-foot-3-inch Ukrainian stunner strikes a balance between getting her nosh on and getting her workout on. Celebrity trainer Brian Abercrombie, who trained hottie with the body Gerard Butler for 300, put Kunis through “P.A.S.E” (power, agility, strength and endurance) training prior to filming Friends with Benefits. During this time, he increased her regular workouts from three to five days per week.

While you may not be ready for such a rigorous regimen immediately following your Turkey Day meal, health and fitness experts assert that even a simple walk will do your body good after a day of indulgence.

Kim Kardashian: What the infamous are really thankful for this Thanksgiving
Sheen still has a job? Celebs who should give extra thanks
Channing Tatum and Hugh Jackman: Hunks we’re thankful for