Kelly Clarkson is so ready to get married. You hear that, Brandon Blackstock? 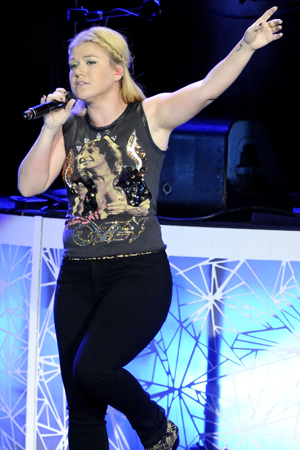 Kelly Clarkson is in love and doesn’t care who knows it! The Stronger singer has been dating Brandon Blackstock for nine months — and she just knows they’re going to get married.

Not that she’s, like, totally waiting for it or anything.

Blackenstock, the stepson of country superstar Reba McEntire, won’t be faced with a bridezilla when that day comes, though.

“Honestly I’ve never been the girl to plan a wedding,” she added. “We will totally, probably elope.”

This isn’t the first time she’s hinted at their eventual union — she told Ryan Seacrest the same thing in October.

“We were just in a room together, and then he came up and said he was from the same hometown as me and I was like, ‘Oh, we’re so getting married’ — I was so that girl,” she told Seacrest on his radio show. She said of meeting the formal Rascal Flatts tour manager, “When he became single, I was on the prowl.”

Many guys would run at all the marriage talk, but Clarkson added that she feels comfortable saying all of this because their relationship is so strong.

Plus, having Reba as a mother-in-law isn’t a bad deal, either.