Rumors are swirling that Kourtney Kardashian is engaged to her longtime boyfriend, Scott Disick, after a Paris proposal. Will the two tie the knot? 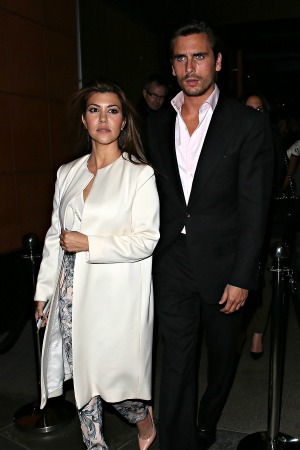 This could be an interesting turn of events: Star and Radar are exclusively reporting that Kourtney Kardashian and Scott Disick are engaged. The rumor has them deciding to wed on their recent trip to Paris, which was, of course, filmed for their reality show.

Disick had been spotted shopping for diamond rings in Fort Lauderdale, Florida, in late October. Could that retail excursion have been all about an engagement ring for his babies’ mama? Quite possibly, as a fellow shopper told Radar, “Scott was most definitely shopping for engagement rings, and all of them were large!”

The restaurant entrepreneur has made no secret over the years about wanting to marry his longtime girlfriend. Kardashian has been way more reticent about marriage than her boyfriend, even though they have had two children, Mason, age 2 1/2, and Penelope, 4 months.

So, is Paris where Disick finally puts a ring on it? The romantic city is the perfect backdrop for a proposal, but the reality stars will likely keep information like this under wraps. “Momager” Kris Jenner will want to give a big celebrity magazine the exclusive in exchange for money and a cover story.

Jenner perhaps needs to silence Disick’s relatives since it appears his aunt, Laurie Disick, has already blabbed to the Star.

She revealed, “We’re all so thrilled they’ve finally decided to get engaged. We’re all so fond of Kourtney, and we wish them a long, happy marriage.”

Let’s hope his aunt made some money for that celebrity scoop.