Leave it to Russell Brand to (somehow) manage an interview with members of the Westboro Baptist Church, best known for their anti-gay signs used while protesting military funerals. 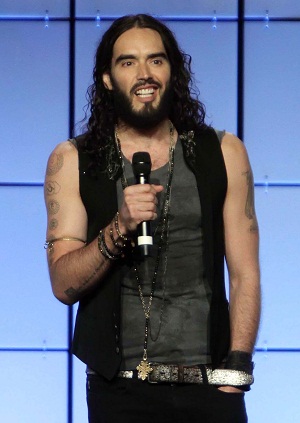 What do gay men and Westboro Baptist Church have in common? Russell Brand, obviously!

We’re not entirely sure how it happened. Westboro Baptist Church is the most vocal set of people against anything “unholy” in the world. Yet Russell Brand (who’s far from saintly) managed to coerce two of its members into joining him on his show, Brand X. What ensued was a mix of something both hilarious and infuriating.

For quite possibly the first time ever, the members of WBC were actually halfway respectful. As a matter of fact, as Brand and his guests carried on a civilized conversation — it was his audience members who became rowdy and out-of-hand. They heckled his guests throughout the interview, much like WBC harasses the grieving family members in attendance at the military funerals WBC protests with anti-gay signage.

As the debate continued, Brand took time to remind us all he is actually quite intelligent, when he questioned their logic by asking,

Have you considered that the Bible, like all religious doctrine, may be allegorical and symbolic, to direct us toward one holy entity of love, as opposed to a simplistic, litigious text to direct the behavior of human beings? The Bible wasn’t written by a cosmic entity.

Except WBC believes the Bible was written by the “cosmic entity” of God. How do you argue with that?

In what seems like an effort to help humanize the gay people WBC so adamantly protests and terrorizes, Brand invited some of his homosexual friends to join the debate. The WBC guests clearly didn’t know about this, or they would have never shown up. Brand X viewers are glad it happened, though.


Sure, he may have given you the creeps in Arthur, but Brand struck gold with this interview due to the sheer fact that he managed to score it. He then solidified his place in the hearts of many when he got them to play his game Heaven or Hell. Who’s going to Hell? Ghandi… among others.