Cancellations are in the air. Starz is the latest network to pull the plug on one of their own. Who’s the unlucky victim? Kelsey Grammer’s Boss. His award-winning performance as Mayor Kane wasn’t enough to keep it alive. 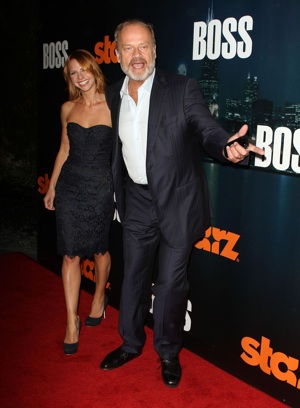 Kelsey Grammer has had better days. Today it was announced that his critically acclaimed series Boss was canceled. After Season 2, there will be no more political adventures for Mayor Kane.

According to EW, Starz has released a statement confirming their decision. “After much deliberation, we have made the difficult decision to not proceed with Boss. We remain proud of this award-winning show, its exceptional cast and writers, and are grateful to Kelsey Grammer, Farhad Safinia and our partners at Lionsgate TV.”

Exclusive Boss clip: When a mistress and wife collide >>

During its two seasons, Boss received lots of praise, and a Golden Globe for Grammer. But it wasn’t affecting TV on a massive scale. Cable and network ratings are significantly different. A few million is considered good in their eyes. Unfortunately, Boss had trouble reaching that benchmark.

The first season’s premiere episodes averaged 643,000 viewers, while the second slid to 579,000. Starz is just cutting its losses. Next year, the network plans to come back with a bang. They’ll premiere the final season of Spartacus: War of the Damned, followed by Season 2 of Magic City, alongside newcomers Da Vinci’s Demons and The White Queen.

Deadline reports that Starz is currently in talks with Lionsgate TV to give Boss a fitting farewell. Instead of a third season, it could get a two-hour movie finale. The telefilm would wrap up the Kane story without leaving fans jilted.

Are you sad to see Boss go?