Fed up with long delays and no-shows by Rihanna, entertainment journalists accompanying the singer on her 777 Tour are going postal. 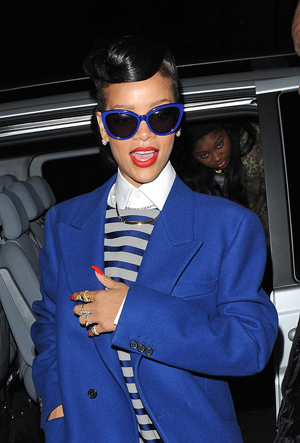 A publicity-snatching plan to have a cadre of journalists accompany the singer on a grueling “seven countries in seven days” tour has backfired as the reporters have descended into furious cray-cray.

Reports began surfacing this week that planes and buses were delayed by many hours, and Rihanna herself was a no-show at parties, press events and on the #RihannaPlane on which the journalists were traveling.

Apparently things got really crazy Sunday, with journalists streaking, drinking like fish and screaming for Rihanna to come out of her “panic room on the plane” tweeted itsthereal (a.k.a. New York pranksters Eric and Jeff Rosenthal).

“Crowd chanted ‘Just one quote!,’ ‘I need a headline!’ and ‘Occupy 777’ while Aussie journo stripped naked and ran around the plane,” tweeted Fuse’s Jason Newman.

Maud Deitch, a reporter with MTV, wrote Sunday that “it now smells like a movie theater concession stand on the Rihanna plane and the people next to us just rolled up to their seats with tumblers filled with whiskey and then one of them promptly spilled it into his seat back pocket.”

Sounds like a pretty fun party! Nah, says Deitch, who says she didn’t join up with the 777 flight expecting palsy-walsy access with Rihanna, but got fed up after sitting on planes and buses for untold hours, days on end.

“It wasn’t until fatigue really started to take hold and passengers started to do the math and put together that reports on gossip sites that had Rihanna been shopping for lingerie in Paris coincided perfectly with one of the many times we were sitting for hours waiting for our plane to take off,” she writes on MTV.com.

Suppose Rihanna is enjoying the publicity she’s getting now? Not only are the journalists ticked over their treatment, they’re insulting the performances themselves.

A journalist who wished to remain nameless told Gawker “The shows are hilariously rote. ‘What the f— is up, Mexico City?’ ‘What the f— is up, Toronto?’ ‘What the f— is up, Paris?’ ‘What the f— is up, [Insert Epcot Center City Here]?’ followed by a tight sixty minutes of lip synching and lethargic thigh-slapping…The parts we love the best are when she ‘ad libs,’ gives a ‘special fan’ an HTC phone (hahahahhahahahah), or pretends like she ‘just heard’ someone request ‘What’s My Name?,’ which she somehow sings while holding the mic at her crotch, air-chewing invisible Big League Chew and staring into the wings.”

Oh, man. That same journalist told Gawker that the most frequently heard complaint on the trip was “Some variation of ‘I want a glass of water so badly, but I guess I should be glad I don’t, because then I’d have to pee.’ It is hard to pee when you are trapped on a bus with no bathrooms for hours and hours because you don’t know when you can board your plane.”

Wow, now that is some careless treatment of people who can write horrible things about you!

Battle for Queen B: Minaj & Rihanna tied for most AMA Nominations
Rihanna keeps her marijuana close to her heart… literally
Rihanna and Chris Brown duet