When a slime-covered body in a pod shows up on a beach, Brennan learns to follow her… feelings? But the real mystery is the new office romance! 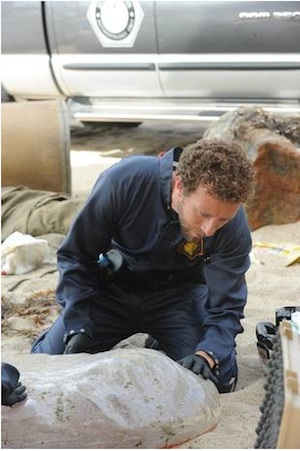 The Jeffersonian crew has finally discovered a case so gross that even Hodgins passes out. After the horrific storm Sandy, a body shows up on the beach in a pod and covered in slime. Ew, that’s just nasty.

The pod man just happens to be in the crime scene business as well. The victim, Lucky, ran a small business that cleans up the mess left behind from murders and other crimes (a job I do not envy). There are several leads in the case. It could be the stepson or Lucky’s mistress. But, it’s hard to put the pieces together when there’s no blood to work with. Only slime.

This time, Brennan (Emily Deschanel) has a feeling (it’s always shocking when she admits it) that it was the victim’s rival. Booth (David Boreanaz) has other ideas and they debate them back and forth. But, Brennan holds her ground and goes with her gut.

Using a hairdryer and a SWAT team, Brennan is able to prove her instincts right that the rival murdered Lucky after finding a heck of a lot of cash in the apartment they were cleaning.

This is an interesting experience for Brennan since she is so logical and fact-based. But this time there was no evidence to prove her theory; she just knew it. This leads to a very cute conversation with her and Booth about why they love each other. She knows why she loves him. She has her reasons. But, he doesn’t even need reasons to love her. Bones finds this very romantic. They are such an odd perfect little fit for each other.

In other Jeffersonian news, Cam is now dating the squintern Arastoo! She dumped her daughter’s gynecologist (weird) and has moved right along to the charming foreign poet. And Sweets is still living with Bones and Booth, trying to obey their “no work at home” rules. This place doesn’t seem to have a problem with interoffice mingling.