The gang must face a deadly tunnel full of dangerous surprises if they want to make it to Philadelphia to save Danny. 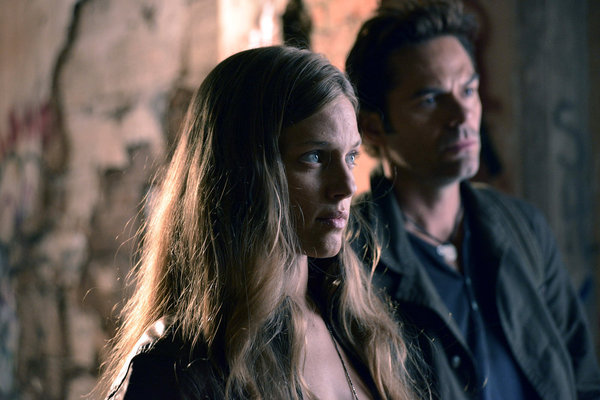 Miles ( Billy Burke ) is in trouble again. Twenty miles outside of Philadelphia, Mr. Matheson has managed to get captured by a group of angry rebels who want to kill him when they figure out who he is. He manages to leverage his knowledge of Monroe ( David Lyons ) to save his life and soon he and his clan are leading a small group of rebels to Monroe’s camp.

As if their journey hasn’t been troublesome enough, the group must now endure the Tunnel of Horrors, as I like to call it. The Tunnel of Horrors is an underground subway that should lead to Monroe’s camp… if they make it out alive! I’m barely even being overdramatic here. Just listen to what our favorite Danny Rescuers had to endure.

First, Charlie ( Tracy Spiridakos ) stepped on a landmine. Just one random landmine hanging out in an underground tunnel. Nora heard the click as soon as Charlie stepped on it. Luckily, Nora’s proven to be good with bombs and was able to rig it so Charlie could move without being blown to bits. However, everyone did have to run for their lives after it exploded anyway.

Then, the group starts to hallucinate as they realize they are slowly dying from lack of oxygen. Miles sees militia that isn’t there. Nora ( Daniella Alonso ) believed she was attacked by an alligator when they were crossing through some water and Aaron ( Zak Orth ) is tormented by a vision of his wife telling him what a coward he is. To top it off, Miles has an imaginary conversation with Monroe where he admits he would leave his new family and rejoin the Militia if Monroe gave him the chance.

And just when they see the light at the end of the tunnel , the alpha leader of the rebels shoots his own people and then kidnaps Miles to take him back to Monroe. Traitor! He then locks Charlie, Nora and Aaron in the tunnel. Together the three are able to bust down the door and save Miles, but Charlie’s head gets skimmed by a bullet and she collapses unconscious, has a vision of her father and almost choices to give up the fight. Fortunately, Miles’ voice brings her back and renews her strength.

At Monroe’s camp, Rachel ( Elizabeth Mitchell ) is being forced to build an adapter for the pendants that will be big enough to provide energy to power missiles and other weapons of mass destruction. Captain Neville thinks she’s doing the work, but not making the intended product ( sort of Iron Man style ), so Monroe brings in Rachael’s old friend to do the work and tells her he’s going to kill Danny and has no use for her. So, she stabs the old man in his heart with a screwdriver and tells Monroe, “Now you need me.”  Don’t get between a mother and her son!