Wondering whether or not Rihanna loves the green stuff? You now have your answer, courtesy of her new top. 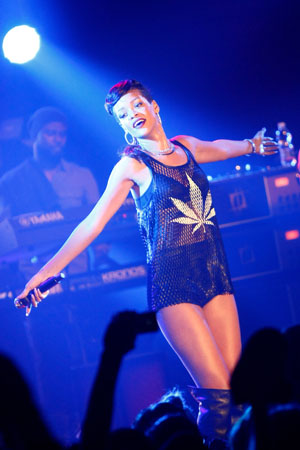 The 8,000 journalists aboard the Rihanna plane might be going mad during the seven-day jaunt around the world, but the “Diamonds” singer is still cool as ever. How does she do it?

We’re going to go out on a limb and assume it has something to do with the big green leaf she so prominently featured on her sweater during her concert in Berlin over the weekend.

You see, RiRi makes no excuses about her love for marijuana — she’s tweeted about it, Instagrammed pictures of it and dressed up as it for Halloween. She even spread some out on her bodyguard’s head during Coachella. Let’s hope he’s well compensated for that.

Our views of marijuana aside, her honesty about it — though technically unspoken — is what we love about the singer. Pop stars are typically guarded and dependent on their publicists for guidance, but we get the impression that Rihanna will totally do whatever, whenever. And judging from her recent GQ cover story, we’re right.

“I want to make music that’s hopeful, uplifting. Nothing corny or supersentimental,” she said. “I just want it to have the feeling that brings you out of whatever you’re going through. I want it to spark that fire. I want it to be real, authentic, and raw.”

Also, confused about all this 777 tour dramz? Read Julianne Escobedo Shepherd’s posts on Spin.com to get caught up. It would make a legitimate scene in a postapocalyptic novel. We must have missed that part where the Mayans predicted that a tiny girl from Barbados would cause the end of the world.