So much happens on every episode of Parenthood. After all, there’s a lot to keep track of with Camille and Zeek’s four Braverman “kids” and their families. To help us prepare, NBC released three promos for this week’s episode — and we’ve got them all! 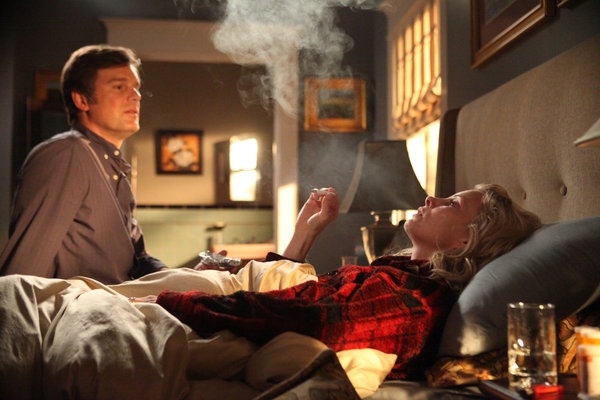 First, let’s recap what happened last week. Kristina began her chemotherapy and had help around the house from Camille when her own mother couldn’t show up. It really solidified their relationship. Then, Drew accidentally met Amy’s college-aged boyfriend. He also realized that worrying about his Aunt Kristina could earn Amy’s sympathy (and kisses). Meanwhile, Amber’s mini golf date with Ryan led to time spent between the sheets. Finally, Julia started Spanish lessons to help her bond with Vincent. Aww.

Now, onto the peeks!

Chemo is rough. You don’t have to be a cancer survivor to know that. Kristina is no exception to the rule. To help ease her suffering, Adam scores something to calm her down. So, where does big brother head when he needs some weed? Crosby (Dax Shepard), of course. Wrapped up in her comfy, warm and well-loved “cancer sweater,” Kristina takes a toke of the “medicine” that is now legal in 18 states.

The next preview is both funny and incredibly stupid at the same time. Oh, Adam. We know you’re on a never-ending quest for father of the year, but a sleepover? Right after your wife’s first round of chemo? Get a grip. Max’s Asperger’s is in full effect when it’s bedtime, wearing down Adam’s patience and amusing everyone else. Check it out…

Finally, as dorky as Drew can be sometimes, he finally stumbled into some genius during the last episode. He figured out that if he looked sad and pathetic about Aunt Kristina, Amy would comfort him. In this episode, he’ll use his sulking to get intimate with her again. Mark/Mr. Cyr (Jason Ritter) walks in on them during the act, though. Gross! Confidences are exchanged and then betrayed, leading Mark and Sarah (Lauren Graham) to this conversation…

Plenty more will happen on the next episode. Amber (Mae Whitman) sets off on a road trip with Ryan. (They’re really giving a new definition to “going slow.”) We’ll also catch up with Crosby, Jasmine and Jabbar and watch as Crosby continues to learn how to be a responsible adult. Hopefully, we’ll also see some more bonding in Joel and Julia’s household.