Nicki Minaj tries to downplay her role as the “tough” judge on American Idol by saying the contestants need the criticism to improve. 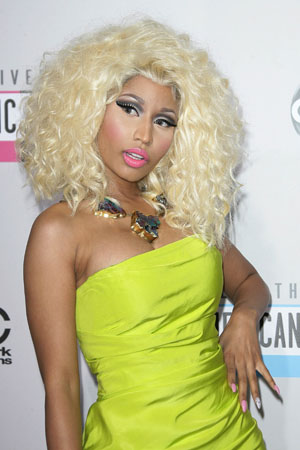 Nicki Minaj might act like a strong, confident woman on stage, but in real life, she’s terrified of how she’ll come across to mainstream audiences as a judge on Season 11 of American Idol.

Who wore it better: Nicki Minaj or Julie Bowen? >>

“Everyone else is so nice,” she said, referring to co-judges Mariah Carey, Keith Urban and Randy Jackson. “I was just thinking back about some things and I was like, ‘I wonder if that was not so nice.'”

The 30-year-old doesn’t mince words. “It’s hard for me to not say how I really feel,” she added to Seacrest.

But, there’s a reason for it.

Did Nicki Minaj threaten Mariah Carey with a gun? >>

“As an artist I’ve always grown more from the tougher criticism,” Minaj added. “And so I would like to be that person and to try to help people get that thick skin and to really give it their all, because it is a competition.”

As for the oft-discussed feud between her and fellow diva Carey? MInaj didn’t say much, other than she’d “be there waiting” if the mom of Dem Babies wants to duet. She might just be pretending to be nice — on her new album, The Re-Up, the song “Hell Yeah” has some lyrics that E! News says refer to the caught-on-tape spat between the two.

Among the lyrics in question?

“But you’re boring as f**k, though.
Why these b*****s in the game so cutthroat?
Why they can’t just let young Nicki live?
Why they gotta feel the wrath to know Nicki is?”

“I’ll take it, sign on the dotted line,
But I’m quick to the check a b***h if she outta line.
Shout out Mike Darnell and Nigel,
Why these bums so mad that the queen on ‘Idol,’ huh?”

Let’s hope the feud continues — it’s the only way we’re going to tune into American Idol when it hits the air in January.