Oprah brings back one of the most popular segments of her show and, at the same time, honors military spouses. 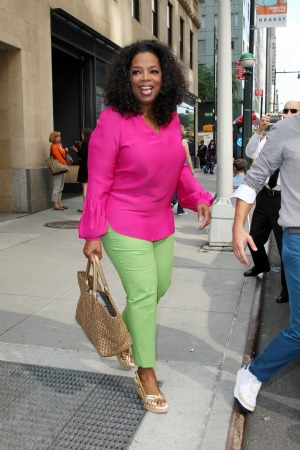 A holiday miracle happened the other night as Oprah Winfrey brought back her “Favorite Things” episode this season. After the end of The Oprah Winfrey Show in 2010, viewers and merchants alike missed the popular episode during the holiday season in 2011. Fortunately, in 2012, no one has to worry — the episode was back with a vengeance on Winfrey’s OWN Network on Sunday night.

The lucky recipients — military spouses — were more than worthy of the thousands of dollars in gifts they received. As Winfrey started the show, she told them, “There’s nobody in the world more deserving of a day like you’re about to have.”

The media maven said she believed they deserved this year’s honor because of “the work and the sacrifice and the love and the care and the vision that you hold… for every life you touch.”

Then the gifting began. Over 50 items were handed out on the weekend show, including a Nespresso Lattissima machine, a $5,000 Bose HD TV, and the coveted Tory Burch “Michelle” tote. The ultimate gift, given at the end of the show, was a five-night trip for two to Fiji. The lucky twosome will stay at the Namale Resort & Spa.

The talk show host understands that “many people here never had a honeymoon” due to the time constraints on a deployed member of the armed forces. The trip aims to give each couple a little private vacation to acknowledge their personal sacrifices for our country.

Of course, the audience had the thrill of a lifetime, but it seems like Winfrey herself enjoyed it just as much. She said, “There’s nothing that I love more than sharing what I love with other people. It’s just so darn fun for me.”

The “Oprah’s Favorite Things” episode first aired in 2002, and it became one of the most popular episodes each season, not only for viewers but also for the merchants who saw their products featured. An endorsement by Winfrey guaranteed a sellout for the holiday season.

The episode will air again on Nov. 23 on OWN, or you can find the official list in the December issue of O, The Oprah Magazine.