Scarlett Johansson certainly wasn’t single for long! She was spotted canoodling with her new French boyfriend in New York City. 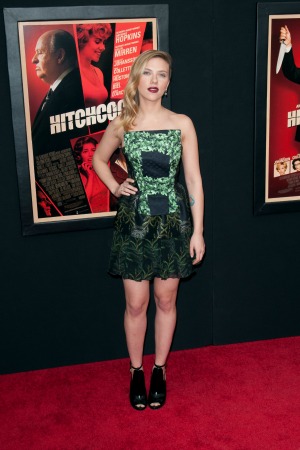 For all of the men who were hoping Scarlett Johansson‘s dance card was empty this holiday season, it looks like that card is completely full. The Hitchcock star is rumored to be dating a Frenchman, Romain Dauriac.

According to the New York Post, the couple was spotted last Thursday night all “lovey-dovey and holding hands under the table all night. They were holding each other while outside smoking in the cold.”

First, Johansson should really exterminate that smoking habit of hers. Second, the actress has clearly has moved on from her former relationship with Nate Naylor. The actress dated the advertising excutive for almost a year, but their romance fizzled in mid-October.

Who is the current mystery man? Dauriac is the former editor of a French magazine, Clark, that features urban art. He currently is the manager of a creative agency.

The couple apparently met through a mutual friend, French tattoo artist Fuzi Uvtpk. The artist recently made news for inking the actress with a new horseshoe tattoo bearing the inscription “Lucky You.” The tat is on her rib cage.

It seems the couple both have a love for ink, as Dauriac is also tattooed by Uvtpk. His reads “Lost Illusions.”

We will keep tabs on this relationship since Johansson has a tendency to be fickle when it comes to her dating life. We all remember Naylor, Sean Penn, Jared Leto and her former husband, Ryan Reynolds.

Besides her active dating life, Johansson has a busy holiday film career, with Hitchcock opening on Nov. 23.