Judd Apatow casts his wife in a surprising number of projects. Do the two just like working together? Or is there another reason? 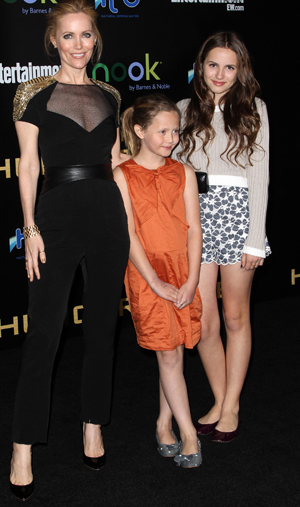 Seems that Mr. Apatow is fond of casting his wife in his projects such as Freaks and Geeks (where she played crush-worthy teacher Ms. Foote, who rushed Bill to the hospital after he ate peanuts) and Knocked Up (Katherine Heigl’s prim sister, who wanted to get into a club and couldn’t).

Mann is even the lead in Apatow’s latest, This Is 40, set for a Dec. 21 release. In This Is 40, Mann plays Debbie to husband Pete (Paul Rudd), a couple last seen in Knocked Up. Mann and Apatow’s two children, Maude and Iris, are both in This Is 40 as well.

Paul Rudd hearts Leslie Mann in This is 40 >>

Does Apatow just love working with his family? Or is it the other way around? Mann explains in Marie Claire magazine’s December 2012 story on the couple.

Apatow’s casting choices might be egregious and annoying if Mann didn’t have such a winning onscreen presence.

Remember her as Steve Carell’s be-hatted barfing would-be bar hookup in The 40-Year-Old Virgin? Those who watched the commentary for that film (written and directed by Apatow), learned that it was Mann who wanted to add pink yogurt to the fake vomit that she sprayed over Carell when he tried to drive her home.

That led to the immortal line, delivered straight-faced by Carell: “Did you by chance have a strawberry daiquiri? Yeah…I thought so.”

It should be pointed out that li’l actresses Maude and Iris are charming in their own right. No wooden Sofia Coppolas these; the girls are able to deliver their lines naturally.

ParaNorman star Leslie Mann strives to be a mom who listens >>

Maude is also a Twitter star, recently profiled in the New York Times for having tens of thousands of rabid fans. Just saying. Apatow-Mann family, will you adopt me?