The former Playboy model-cum-autism spokesperson got a big handful of Justin Bieber’s butt at the AMAs Sunday night, kissing the surprised teen on the neck. 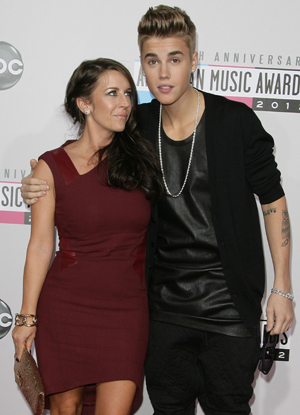 Jenny McCarthy, did you forget you are a mom for a sec? The former Playboy model-cum-autism spokesperson got a big handful of Justin Bieber‘s butt at the AMAs Sunday night, kissing the surprised teen on the neck.

“Wow, I feel violated right now,” said Bieber, who was receiving a pop/rock album prize at the American Music Awards from the self-proclaimed “cougar,” 40.

Backstage, McCarthy admitted, “I did grab his butt. I couldn’t help it. He was just so delicious.”

“So little,” she continued. “I wanted to tear his head off and eat it!”

McCarthy is known for her wacky antics, of course, so she no doubt assumed the grope would be taken as a joke.

She was so confident, in fact, that she posted a picture of herself kissing Justin’s cringing neck, with the title “Cougar rape #poorjustin.”

Still, viewers who watched McCarthy nab Bieber mostly got a little “ick” vibe. After all, McCarthy is literally more than twice Bieber’s age, and though she may have meant her affection playfully, it came off a bit predatory.

After all, McCarthy is a devoted (if controversial) mother figure, mom to son Evan, whom she claims was “cured” of autism.

Would she enjoy seeing a woman her own age paw on Evan when he’s 18, even playfully? And if Bieber was a teenage female and McCarthy a 40-year-old man, wouldn’t the groping make McCarthy look like a dirty old man?

By the way, though gossip hounds were hoping Bieber would show up with beleaguered gal pal Selena Gomez, that’s his mother on his arm.

Some have said that Gomez and Bieber were backstage holding hands, and E! News reported that Gomez arrived at the show’s end to meet up with Bieber after the ceremony. Us Weekly also reported that the pair attended an AMAs after-party hosted by Bieber’s manager, where they “held onto each other for much of the night and snuck in a few kisses as well.”