At this point, almost everyone has seen The Avengers. It was a huge blockbuster that featured a team of superheroes. One of them was played by Jeremy Renner, who used Saturday Night Live to give his character a good ribbing. 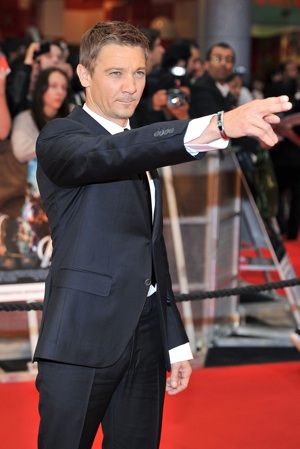 Last weekend, two-time Oscar nominee Jeremy Renner hosted Saturday Night Live. The actor has had an impressive year, so we’re not surprised he was asked to headline the show. During the past 12 months, Renner’s been in everything from Mission: Impossible — Ghost Protocol, to The Bourne Legacy and of course, The Avengers.

Yum. Jeremy Renner and Adam Levine on SNL this week! >>

The latter is the highest-grossing film of the year, and the third-highest of all time. Therefore, SNL couldn’t leave it unscathed. Renner was game and happily poked fun at the superhero epic as well as his not-so-super character.

In the film, Renner played Clint Barton, code name Hawkeye. He’s a master archer who can hit the most unlikely targets. He along with Scarlett Johansson‘s Black Widow are the normal members of the group. Yes, they’re master assassins, but they can’t fly like Iron Man, summon lightning like Thor, leap over cars like Captain America, or turn into a giant monster like Banner.

The movie was great, both critics and fans loved it. But they couldn’t ignore the obvious. Hawkeye isn’t much of a superhero. Take away his arrows and what does he have left? Find out in this hilariously accurate sketch.

Interesting sidenote, the sketch also features SNL regular Taran Killam (as Captain America). Killam is married to Cobie Smulders, who plays Maria Hill in The Avengers. So Renner isn’t the only one with a real-life connection to the film.