There definitely were a few popular trends on this year’s red carpet for the American Music Awards. From sparkles to shine to muted black, what did they wear? 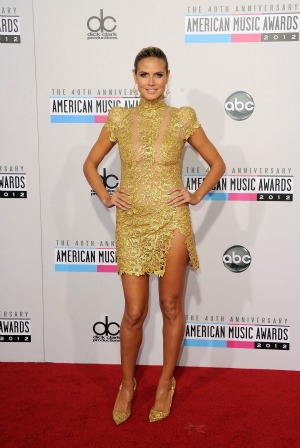 Sparkle and shine should have been the theme for the 40th American Music Awards. The red carpet was filled with sequins and all things metallic. Those who wore sparkles kept the colors very muted, with mostly beige, light pinks, and golds.

Taylor Swift and Heidi Klum showed up in similar-looking short gold dresses. Taylor Swift wins this one, though, with a slightly less body-hugging dress. The singer just looked like she wasn’t trying as hard to be as hot as Klum was (and ended up being slightly hotter).

Ke$ha showed up in a short taupe number similar to Swift and Klum’s (but without the sparkles), which allowed her to show off her beauty more than some of the previous dresses she has been seen in lately.

It seems many on the red carpet had some sort of metallic glimmer to their outfits, even if the outfit was meant to be understated. Pink’s dress was one of those metallic numbers, as well as jackets on Lance Bass and members of The Wanted and the Backstreet Boys. Stacy Keibler, Hayden Panettiere, Elisha Cuthbert, and Kelly Rowland also showed up in some form of sparkle or shine. 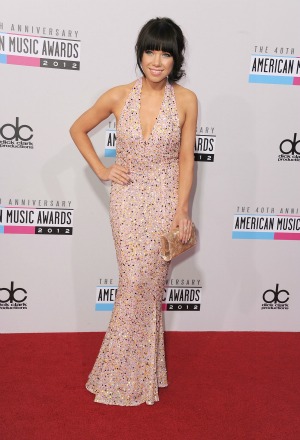 But of all the sparkly dresses on the red carpet, Carly Rae Jepsen’s may have been the best. It was longer, but equally sparkly and not as tight as some of the rest. The singer didn’t look like she was trying too hard, but may have looked the most glamorous of all those on the AMA red carpet.

Those on the red carpet without that shine were mostly in understated black. From Lady Antebellum to Justin Bieber and Lucy Hale, the red carpet was filled with celebrities looking good in no color or shine.

Of the celebrities on the red carpet, very few of them went with color. But there were a few standouts. Nicki Minaj showed up in a lime-green gown and Carrie Underwood stunned in purple lace.