What does it really take to have an everlasting love? Is it different for everyone? Paloma Faith’s latest video unravels what makes all the difference. 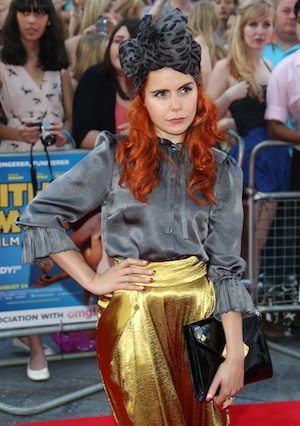 A big city, an even bigger love story, and one bond — so fragile, yet so unwavering.

Taking place in New York City, two lovers are consumed by a tumultuous love affair that knows no end. Volatile at times, the couple faces hurdles as any other would — but this one couple’s journey is raw in its depiction.

With a very “old Hollywood” aura, the song lyrically speaks on behalf of the couple but, as with most loves of a lifetime, words alone are not sufficient. Their respective gazes, passion and defiant opposition are beautifully captured. Her innocence shows through her mannerisms, and his devotion is unearthed through each trial.

She is stark naked in a few scenes, but they’re ridden with symbolism. To capture the essence in a few words, it would be “take me as I am.” It is a vulnerable cry to her love, remarking on how he sees right through her, how much she lets him in and how he wants her just as she is.

What does it take to have a lifetime love?

The title of the track is “Just Be” and the notion behind it is that no action alone, no set of words alone, no amount of money alone totals a successful relationship. That companionship — to have someone present through all of life’s ups and downs — matters. That it may not suffice to have just an occasional commentator or an absent provider, but a partner, one who can be with you and accept you as you are — and that is priceless. The most touching moment is toward the end of the video, which is a surprise we’ll leave for you to unwrap.

Who is Paloma Faith?

Flaming red hair. Porcelain skin. Doe-like eyes. Outfits as loud as her lyrical imagination. Paloma Faith is an artist as intriguing as she is talented. Her throaty, classic sound is unusual, a uniqueness we can all appreciate. Imagine Lana Del Rey, but with a more mature sound. I had thought her peculiarities would be the extent of my admiration until I found out she recently performed alongside headliners One Direction and Girls Aloud for a “Children in Need” show for the United Kingdom’s most disadvantaged children, according to Celebrity Red Carpet.

The track “Just Be” is from Miss Faith’s second album Fall to Grace. If you haven’t heard her first debut single “Stone Cold Sober,” you absolutely have to listen to her lyrically striking song “New York.” This stunning song was co-written by Paloma, with Greg Wales and Matt Hales. If you’re a romantic at heart, you’ll truly enjoy this!

For more editor’s picks, check out