The actress heard the movie was being made and did what she had to to get the part, but it looks like the producers may have regretted hiring her. 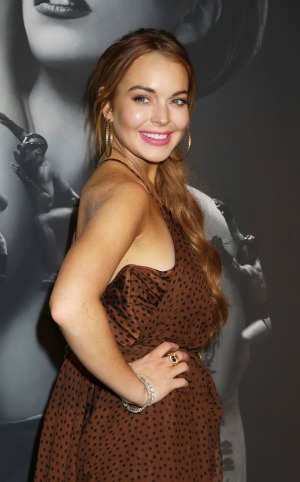 Larry Thompson, producer for the Lifetime film Liz & Dick, a story about part of Elizabeth Taylor’s life, dished this week on working with Lindsay Lohan. He said making a movie with the actress was “not for the faint of heart.” So, if he had any idea of her past (or reported erratic personality), why would he hire her? Lohan sat down with Good Morning America Friday and said getting hired was all her own doing.

“I had seen that they were going to be making a movie and I got the producer’s number and started harassing [him],” she told the morning program, according to the LA Times. “I didn’t even care if my agents were going to do it or not, I just did it myself too. Because, I was like, ‘No one else is going to play this role, I have to do this.'”

Lohan is a fan of Taylor’s and said she worked hard to represent the actress the best way she could, but it was also intimidating because she knew people would be watching her portrayal.

“It’s really nerve-wracking to play someone that’s such an incredible force, and a wonderful woman, so I was kind of nervous to see what people would think of it,” she told GMA, according to the LA Times. “You can never actually be a clone of the person, so you have to bring some of yourself into it. I was lucky enough, because I do relate to Elizabeth Taylor in a lot of ways.”

Lohan said she is staying positive and trying to work as much as possible. She knows herself well enough to know that working is the best way to keep out of trouble.

“I’m reading scripts every day,” Lohan said. “I just want to keep calling my agents. I’m like, ‘Just keep me on set. It’s safer that way.'”